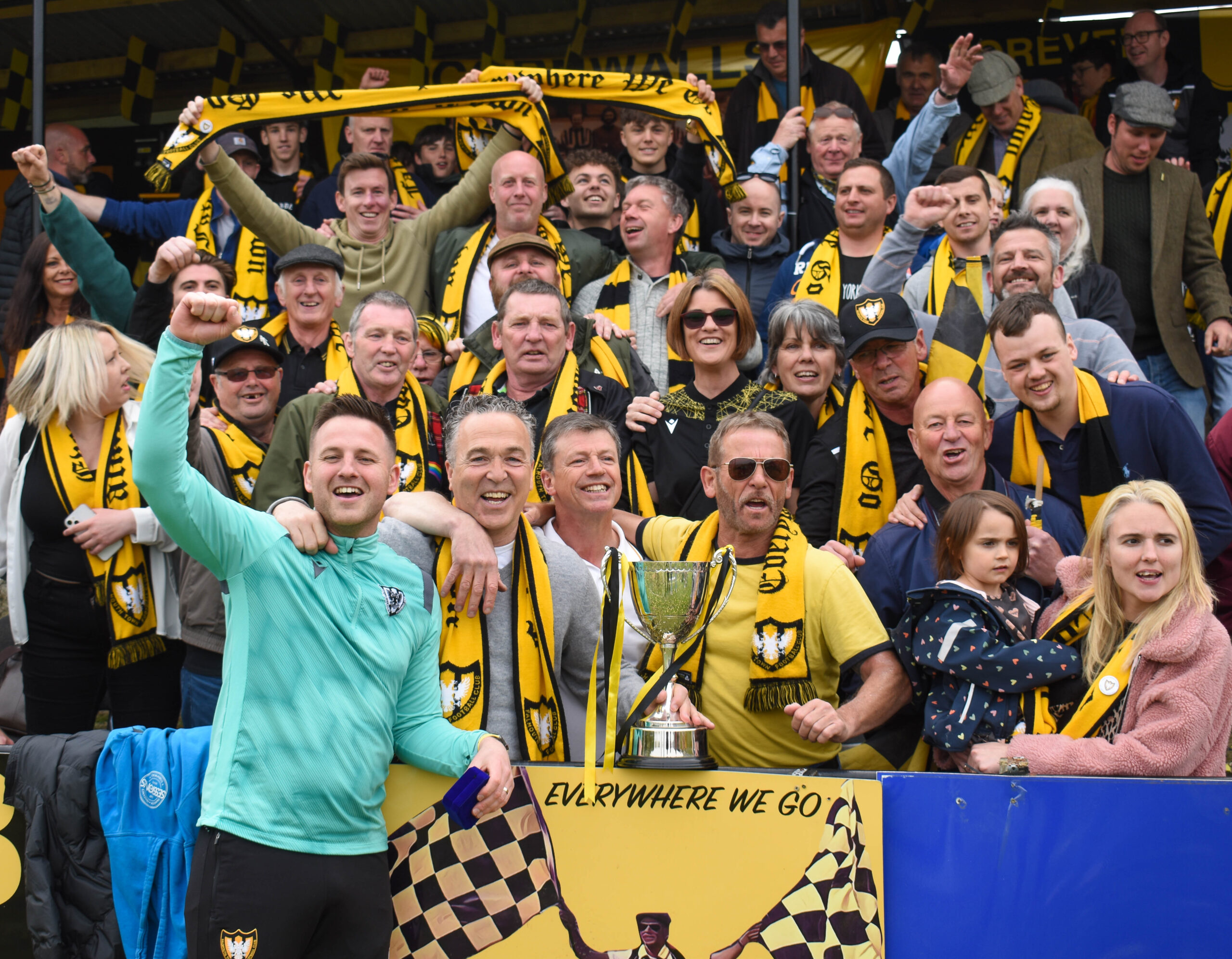 Jack Bray-Evans scored a hat-trick as South West Peninsula League Premier West champions Town cruised to a comfortable victory in their final league game of the season, with those goals all but securing the golden boot trophy for the striker.

A brace from David Broglino and another from Luke Barner capped off another excellent victory – their 30th of the season from their 32 league games – as Town also set a new record for fewest points dropped (five) in a Step 6 SWPL season, eclipsing Bodmin Town’s previous record of six in the 2011/12 campaign.

The final whistle kickstarted the celebrations on the field and in the stands, with skipper James Ward lifting the league trophy before the players and management joined the F-Troop came together in scenes those involved are unlikely to forget.

“It’s got to be up there with one of the best moments of my footballing career,” Westgarth said. “The support, the celebrations, the numbers, the colour, the families, the joy – it couldn’t get any better.

“That was for [the supporters]. At the end it was magical. It’s great for the players; if the players can’t get a buzz out of that [then what will]?

“It’s not a case of a quick wave and say, ‘thanks for coming, see you later’; we’re in it with them and I can’t wait to get in the bar, celebrate with them and enjoy the night.

“My phone’s been so busy these last couple of weeks with ex-players, managers, friends, family all congratulating and wishing all the best, and to see people like Joey Scott coming down from Plymouth; Geoff Freeman here, brilliant. What they’ve given this club over the years is brilliant.”

You could be forgiven for overlooking the match on a day very much about the celebrations after the final whistle, but Town were determined to put on a show on the pitch to match the scenes off it after the game, and they did just that with a dominant display.

“Scotty Kellow at right-back [was superb]. You can go through the whole team, there wasn’t a bad performance in them. I just said to the boys, ‘this is one for your family, this is one for your pride, go and put a show on,’ and that’s exactly what they’ve done.

“It can be easily dismissed sometimes when you’re successful, but if it was that easy everyone would have done it. The boys have been so consistent this year, and to win trophies, to be successful you obviously need good players, but you need commitment, you need attitude, you need a squad – mix that all together and you get days like today.”

It was a day to remember for the club, but it was also an important one personally for Bray-Evans, who all but secured the west division golden boot trophy with his hat-trick on Saturday.

The pressure was on after Bodmin Town’s Dan Jennings bagged a four-timer against St Dennis on Friday night to move level with Bray-Evans at the top of the standings, but the Town man stepped up when it mattered and scored three times to all but ensure that the golden boot would be heading his way.

Only Liam Eddy can deny Bray-Evans the trophy, with the St Blazey striker needing to score five times in his side’s Walter C Parson League Cup final against Torpoint Athletic next Saturday to draw level.

“I’ve been in [Jack’s] position before,” Westgarth said. “I won the golden boot in the first-ever SWPL season and you naturally think about it, you can’t not think about it, and obviously last night when DJ [Jennings] scored four I think he was twitching a little bit, but Jack was brought here to score goals and he’s made such an impact all season.

“Where [Luke] Brabyn deserves so much credit, and it doesn’t get noticed, was that he was the talisman up front and he moved sideways and Jack has slowly overtaken him because he was golden boot leader for ages and also Falmouth Town’s top goalscorer. That guy deserves massive respect and praise from me because things like that go unnoticed and Brabyn is a top man.

“Jack joined this club to win trophies and that’s exactly what he’s done. He’s been heavily involved in anything good that we’ve done. He scored the winner in the Senior Cup, the winner against Newquay a couple of weeks ago and then scores a hat-trick today, absolutely brilliant.”