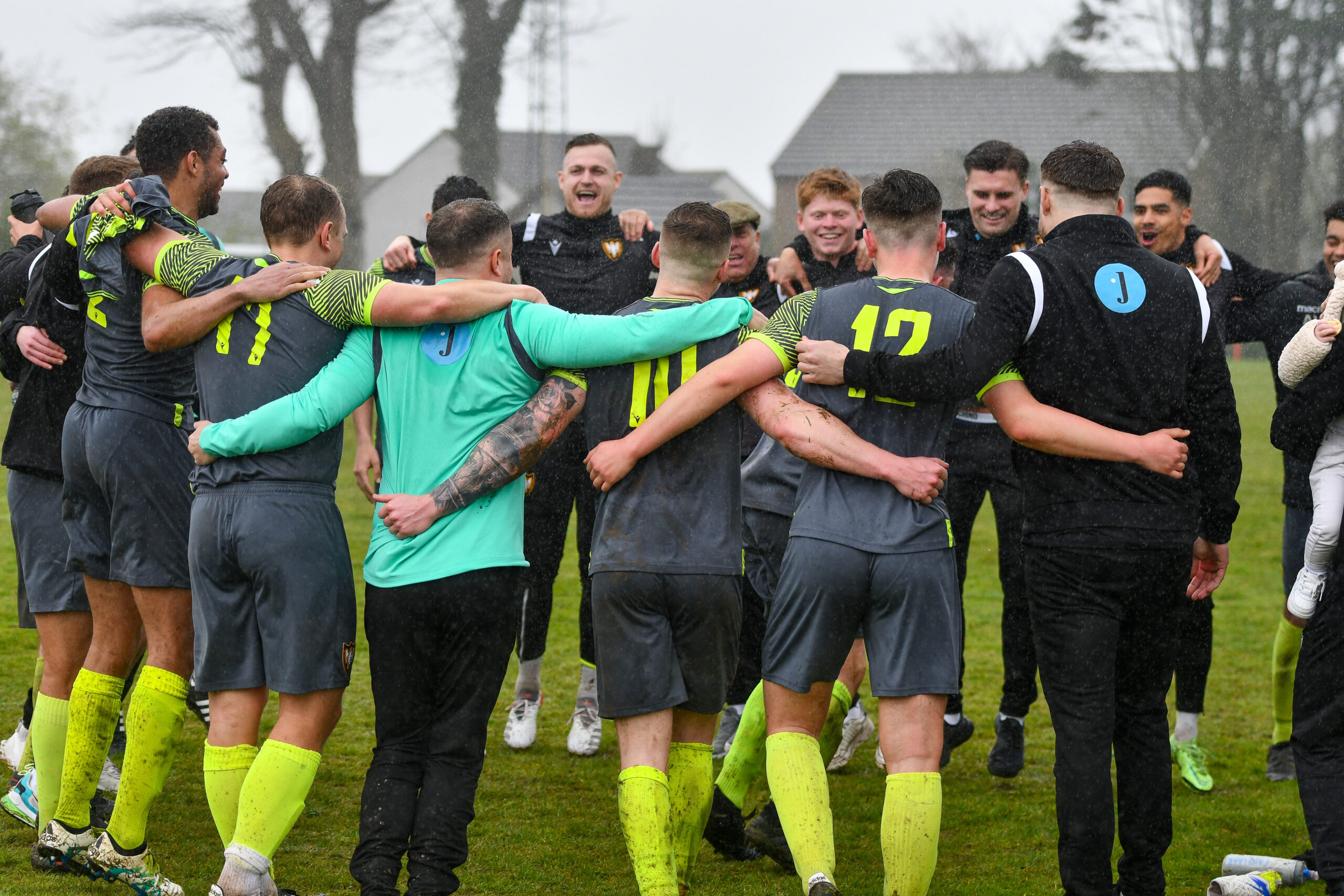 Falmouth Town manager Andrew Westgarth says it is ‘an amazing feeling’ to finally see his side crowned South West Peninsula League Premier West champions after their 3-2 win at Penryn Athletic on Friday.

Town required one point from the game to clinch the title, and goals from Alex Wharton, Olly Walker and Jack Bowyer did the business as they took all three to sew up the championship in style.

Jack Rapsey and Ryan Reeve netted for Penryn at their Kernick Road home, but it was Falmouth’s day as they confirmed their first league championship for 22 years.

The confirmation of their champions status sets up what could be a memorable weekend for the club, with Town set to face Wendron United in the Cornwall Senior Cup on Easter Monday.

“I’m over the moon,” Westgarth said at full-time. “It’s felt like it’s been a long season: we’ve had to deal with expectation all year and everyone’s been saying we’re going to win it.

“It’s great now to actually take the chains off and say we are champions, and for the first time in 22 years. It’s an amazing feeling.”

He continued: “What a fairytale way to win it, at Penryn. Being a local lad myself, I know the Falmouth-Penryn rivalry is massive. We had so many chances in the first half and you always fear, ‘What if?’ We did miss so many, and when they equalised at 1-1 you’re thinking, ‘It’s game on here,’ but I was so proud of the boys today.

“It was a bit of a no-win situation [whether or not to rest key players ahead of the Senior Cup final], you’ll always get retrospective managers saying what they would have done, so I was absolutely delighted with the lads.

“The main aim was to win the game and the second aim was to protect everyone for Monday and we’ve done that. I’m absolutely buzzing, the noise and atmosphere was brilliant today. I’m a proud man.”

With more than half an eye on their Senior Cup final date with Wendron on Monday, Westgarth opted to shuffle his pack and rest some key players ahead of that tie at Poltair Park.

The Town boss made eight changes from the side that won 4-0 at home to St Dennis six days prior, with Ade Thompson, Jamie Ware, Ollie Moody, Scott Kellow, Jack Webber, Jack Bowyer, Charlie Edney and Olly Walker all coming into the starting line-up, which also included reserve-team goalkeeper Zach Telling.

There were also substitute appearances for Ryan Martt, Jasper Turner and assistant manager James Miller, and Westgarth expressed his delight with everyone involved.

“I think today epitomised our squad and what we’re about,” he said. “Everyone that played today has been in and around it. A special mention to Jamie Ware, I thought he was outstanding at centre-half, coming in from the second team.

“Credit to Martty [reserve-team manager Ryan Martt] and the second team boys that we’ve got players like that. Jasper [Turner] is another one for the future, and we got the chance to bring on [James] Miller – being an ex-Penryn player himself, it was a nice moment for him.”

There was an added significance to the inclusion of the likes of Martt and Moody. The pair, together with the regular duo of Luke Brabyn and David Broglino and former right-back David Blizzard, joined Town from Penryn in the summer of 2017 as Westgarth began a rebuilding project at Bickland Park.

Martt and Moody have been two regular fixtures in that five-year journey, and while they have been limited to a handful of combined appearances this term, their inclusion on Friday shows that the core of that team from 2017 still remains at the heart of the club now.