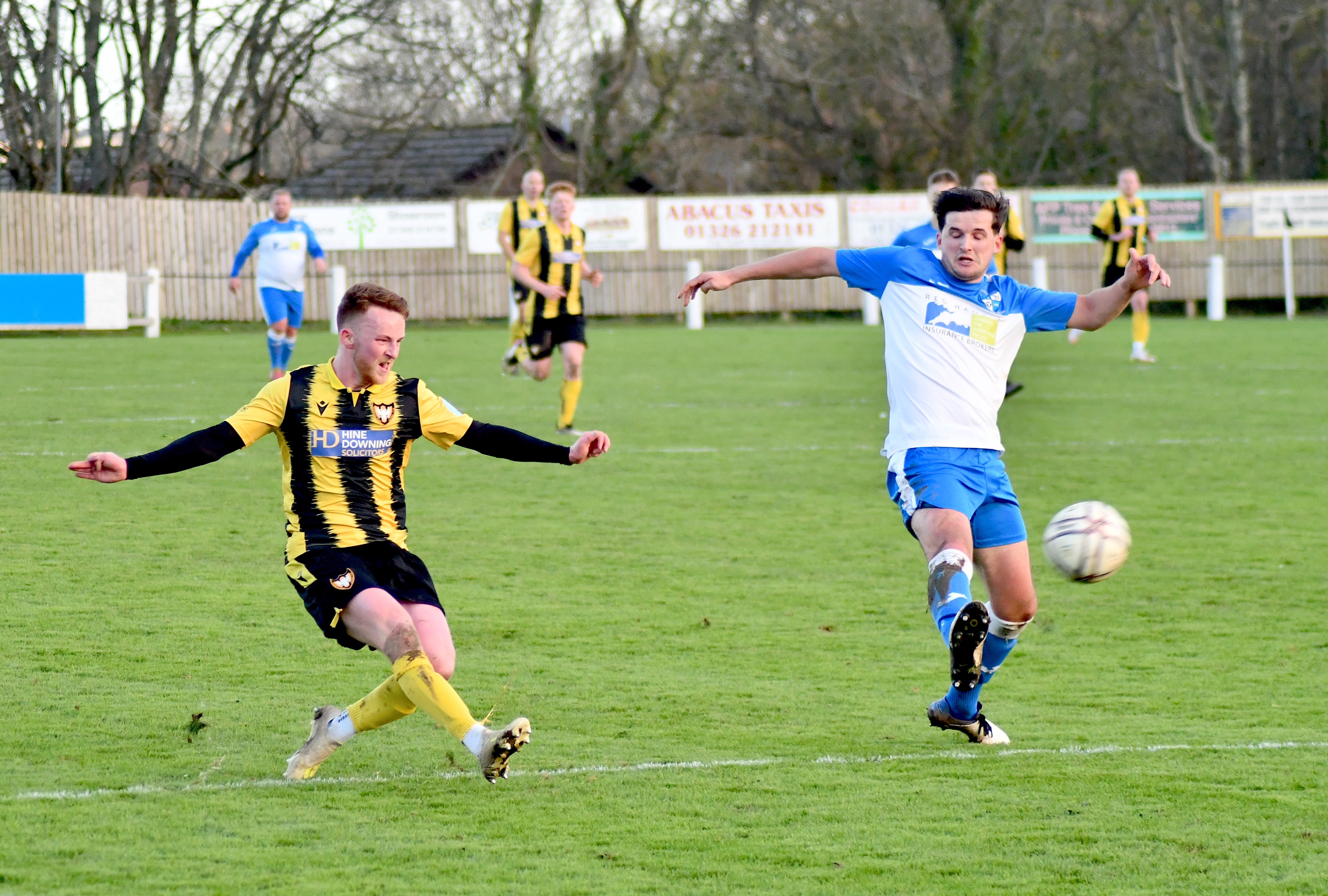 JACK Bray-Evans scored twice as Falmouth Town bounced back from last week’s FA Vase defeat with a confident 4-2 win at home to Camelford.

The victory at a bitterly cold Bickland Park was Town’s 14th in as many league games this term as Andrew Westgarth’s men continued a dominant South West Peninsula League campaign that has seen them score 62 goals and concede only 14 to date.

Former Newquay man Bray-Evans opened the scoring in the tenth minute before team-mate Andreas Calleja-Stayne doubled the advantage early in the second half.

Camelford, who sit third in the SWPL, quickly hit back through Cam Hutchison’s tap-in, only for Luke Brabyn to instantly restore Town’s two-goal cushion from the penalty spot.

Bray-Evans removed any doubt as to the destination of the points with a fine near-post header midway through the half, with Hutchison clawing a goal back for the Camels in stoppage time.

The win sees Town move seven points clear of second-placed Liskeard Athletic ahead of next weekend’s must-see clash between the top two sides at Lux Park.

Heavy rain on Friday night cast some doubt over the fixture, with games at Penryn and Godolphin Atlantic falling victim to the elements, but the green light was given following a successful pitch inspection at 10am.

Westgarth made one change from the side that exited the Vase at Buckland Athletic last week, with Kirk Davies replacing Scott Kellow at right-back. Camels boss Reg Hambly made three changes from their league defeat at home to St Austell seven days earlier, with Connor Rhodes, Matt Bartlett and Ed Harrison coming in for Liam Downing, Mark Gusterson and Cameron Patterson.

Shooting towards the Packet End in the first half for a change, Town quickly got themselves on the front foot in front of their fans and opened the scoring in the tenth minute. Tom Annear’s free-kick was helped on by Toby Clark towards the unmarked Bray-Evans, who rifled the ball past Camels gloveman Josh Colwill.

The question then was how long it would take to find the net again as Town enjoyed a lengthy spell of dominance. Skipper James Ward sent a looping header onto the top of the crossbar before the Camels had Colwill and captain Tom Cowling to thank on separate occasions for blocking dangerous crosses from Luke Brabyn and Luke Barner.

Ryan Barnes had been a relative spectator for the first half-hour but had to be alert to make an excellent stop from Andy Boxall, who got on the end of Harrison’s inviting cross.

Not to be outdone by his opposite number, Colwill provided the save of the match barely a minute later when he superbly denied Brabyn, whose shot was destined for the top corner.

Town pressed for a second before the break but it was not to be, with Calleja-Stayne thwarted on two occasions while Barner spurned an excellent chance from Brabyn’s low cross.

Camelford came out of the blocks quickly after the restart and a Bobby Hopkinson free-kick caused havoc in the Town box in the 48th minute, with a spot of pinball breaking out around the six-yard box before the ball was eventually cleared.

The visitors would live to rue that chance as Town doubled their lead less than a minute later. Annear was again the instigator, with his deep cross nodded down at the back stick by Brabyn for Calleja-Stayne to drill into the top corner from the centre of the box.

Camelford were on a run of four games without a win, but they dug deep and showed the spirit that had taken them to a top-three spot and halved the deficit only five minutes later. A shot came in from the left of the box and while Barnes was able to parry it away, he could only tip it into the path of Hutchison, who could hardly miss from six yards.

But any hope of a resurgence was extinguished barely a minute later when Town were given a penalty following a handball inside the box. Brabyn stepped up and proceeded to net his 21st of what has been a superb season in front of goal.

Refusing to give up, Boxall and Hutchison were guilty of missing good chances for the visitors shortly after, but any hope of rescuing something from the game was lost as Town grabbed their fourth in the 71st minute.

Keen to emulate his fellow full-back Annear’s early efforts, Davies turned provider this time with a fine cross towards Bray-Evans at the near post, who planted an equally fine header past Colwill to land his 20th of the campaign and eighth in as many games since joining Town from Newquay.

With the game won, Tom Moxham, Alex Wharton and Jack Bowyer were introduced from the bench and the latter almost made it five with his first effort, but couldn’t find a way past Colwill after leaving the defence for dust.

There was enough time for Camelford to pull another back deep into stoppage time, with Hutchison firing in from close range in the final act of the match.