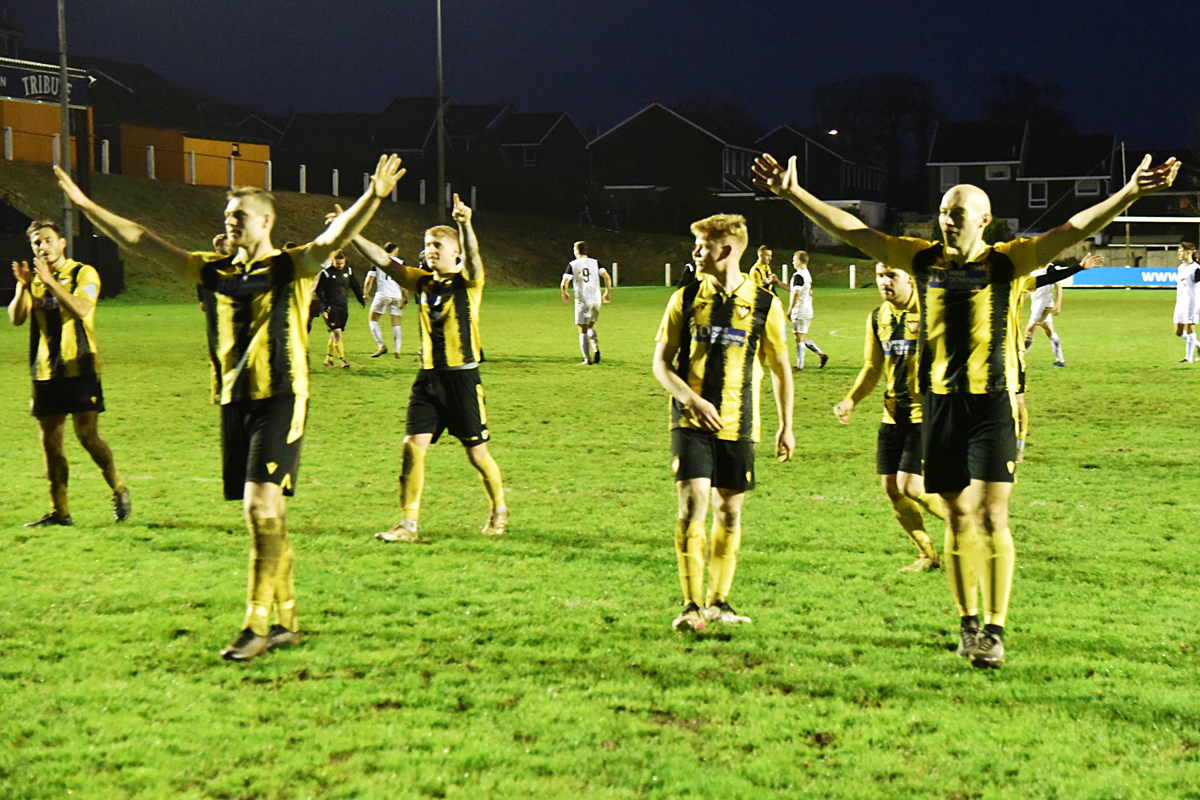 Falmouth Town coach Charlie Davis was delighted to win a ‘difficult’ game against Wadebridge Town on Saturday, with his Town side twice coming from behind to win 4-2 at Bickland Park.

Wadebridge top-scorer Matt Lloyd restored Paul Rowe’s side’s lead shortly before the interval, but two goals from David Broglino turned the game around after the break, with Luke Brabyn securing the three points late on as Town extended their lead at the top of the west division to 12 points.

REPORT: David at the double as Town march on

“I’m just delighted to get the win,” Davis – who took charge of the team in the absence of manager Andrew Westgarth – said at full-time. “Another difficult result against a top team and especially at this time of year with the conditions maybe making things more challenging for both sides, but we’re delighted.

“They’re no mugs, they’ll pick up great results and I’m sure they’ll be in and around the top of the league, so to beat anyone of that stature, we’re always delighted to do that.”

The win was Town’s 16th from 16 games this term, ensuring a continuation of a remarkable winning run this season as the campaign reaches its halfway point, and Davis and the rest of his team are determined to enjoy every moment of their fantastic run.

“It feels great, we can hear the boys celebrating in the changing room now,” he said after the final whistle. “I said this the other day: we’re not going to apologise for enjoying it, this is really fun and it’s decent to be involved in, so we’ll certainly enjoy the win and try and keep going.”

The half-time interval proved to be a crucial point in the afternoon, with Town going into the break having just gone beyond for a second time through Lloyd’s well-taken header.

But whatever was said in the home changing room during those 15 minutes clearly had an effect as Town flipped the game on its head within nine minutes of the restart through two goals from Broglino, before Brabyn clinched the win late on.

“We tried to address a couple of bits that we felt we could do better [at half-time], I think a lot of it was just application,” Davis said. “It was maybe that final bit of quality, just little pockets we were trying to play in and I felt that maybe we could get a bit wider and forward a little bit quicker, and sometimes we got into areas that were tighter and maybe that was turning over possession a little bit.

“It’s difficult to shut every single team out, but on reflection they’ve had their chances, they took them and you go from there and you think, ‘how can we put that right ourselves?’

“And I felt, in the second half, if you look at the chances created by both teams then we were far in excess of theirs, and that’s shown in the final score.”

Man-of-the match Broglino turned the game in Town’s favour with those two strikes – his 11th and 12th of the campaign – within the first nine minutes of the second half.

His second goal especially will be remembered by those in attendance at Bickland Park on Saturday, with the talented midfielder finding the top corner from a tough angle more than 25 yards from goal, and Davis was effusive in his praise for his number eight at the final whistle.

“Broggy’s got a finish in him for sure, he’s a goalscoring midfielder, his set piece delivery says it all and his second [goal] was quality,” Davis said. “It’s the only place he could go from that position, and to finish as he does in the top left-hand corner, it’s just a real piece of quality and kudos to him.”