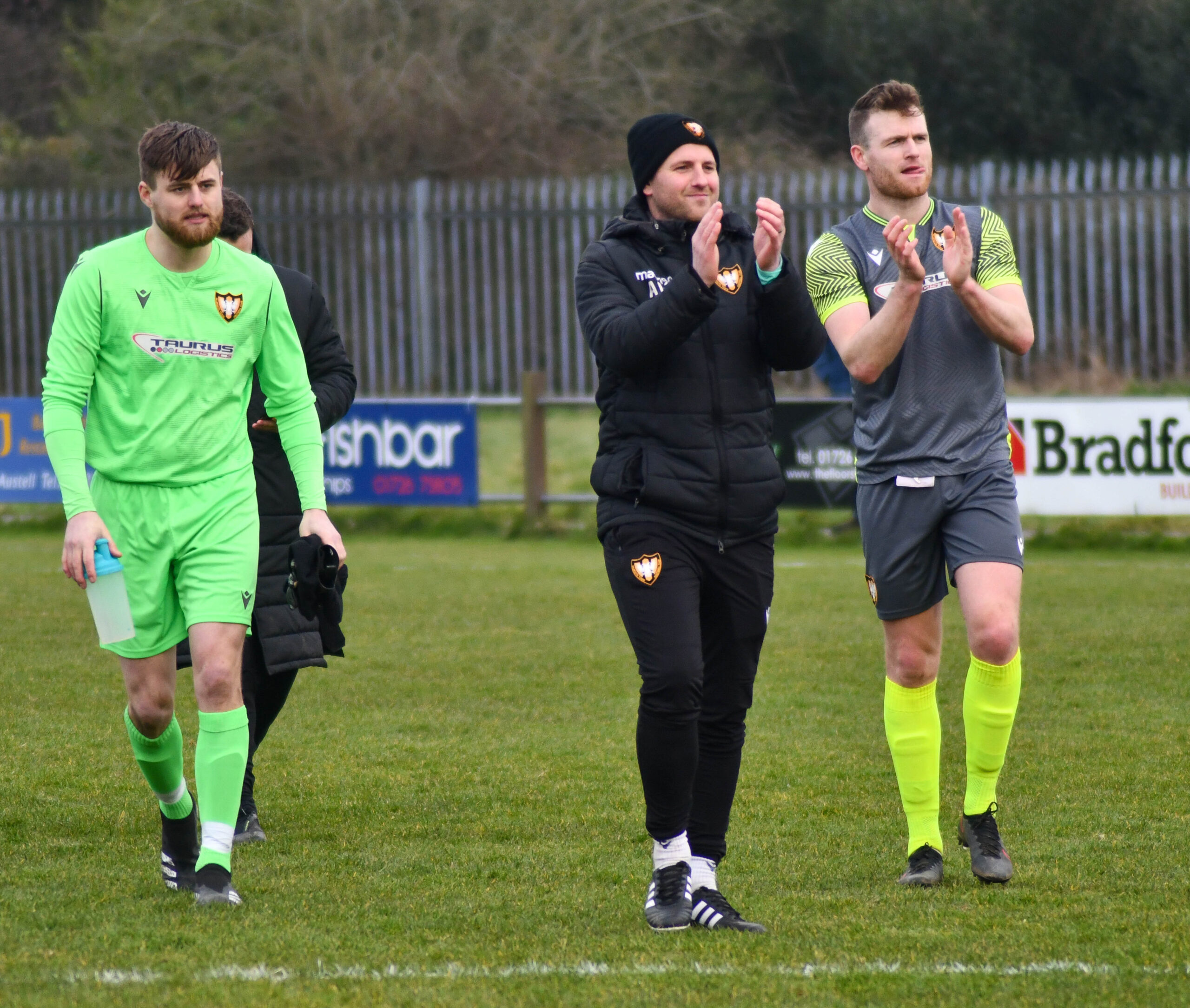 Tim Nixon opened the scoring for the South West Peninsula League west division leaders early on at Poltair Park before Jack Bray-Evans nodded in a second with half-time approaching, only for Connor Paine to quickly halve the deficit before the interval.

Town wasted little time in restoring their two-goal advantage in the second stanza with Bray-Evans notching his second of the day and 22nd in just 21 games since joining the club in the 53rd minute.

The Lillywhites’ afternoon went from bad to worse in the aftermath of conceding the third with goalkeeper Brett Allen receiving two yellow cards for dissent, with Kieran Powell donning the gloves for the remaining 38 minutes.

This effectively ended the match as a contest and it was left to Tom Annear to score the fourth and final goal eight minutes from time, with his overhit cross creeping inside the far post for his first of the campaign.

With second-placed Liskeard Athletic being held to a 2-2 draw at home to St Blazey, it means Town are now potentially four wins away from securing the SWPL Premier West crown.

“It was a great away win in tough conditions in terms of the surface and the wind and obviously we know how tough a game St Austell gave us at home, but it was almost like facing a different side,” Westgarth said after the game. “Considering St Austell are renowned for being a possession-based side, I felt like the only time they really hurt us was from dead balls.

“Those conditions were testing and we were going up the slope in the first half and they did cause us a few problems from set pieces – good corners and good crosses coming in – but other than that I thought we defended so well in the first half.

“It was so key in that first half to impose ourselves on the game and not to fall behind and I thought some of our goals were great. We were fully deserving of our 2-0 lead.

“It was disappointing to concede just before half-time from a corner. I talked to the lads and they were all adamant that the ball hadn’t gone out for a corner, but that being said you’ve got to deal with it.

“But I thought in the second half, to score the goal when we did from their point of view they would have been so disappointed, because at 2-1 they’re in the game, then we score to make it 3-1 and a moment of madness from their goalkeeper to go and get sent off and it’s effectively game over.”

Luke Barner was given the man of the match award by his team-mates following an excellent display that saw him claim a hat-trick of assists and play an instrumental part in Town’s attacking fortunes.

The performance capped off a fine week for the forward, who scored the opening goal – his 17th of the campaign – in Town’s 4-1 Cornwall Senior Cup semi-final victory over Dobwalls four days earlier.

“Leading up to the semi-final he was probably a little bit quiet but he’s been chipping away with important goals and assists,” Westgarth said. “Barner’s numbers this year have been unbelievable – another three assists yesterday. He just plays in a pivotal part of the pitch, complements that front three and is a link to the boys in midfield.

“He was excellent yesterday on a testing pitch in tough conditions. We just needed that bit of quality which he’s got. When Luke’s on form there’s not many better and his numbers are just unbelievable this year with the amount of assists and goals he’s got.”

With Toby Clark and Jack Bowyer unavailable and Scott Kellow still carrying an injury, there was space among the substitutes bench for young midfielder Jasper Turner, with the 17-year-old making his Town debut as a late replacement for David Broglino.

Former Truro City man Turner suffered a broken leg while playing for the White Tigers’ under-18s team earlier in the season and has been training with Town after completing his rehabilitation, and made his club bow with seven minutes left to play at Poltair Park.

“He’s been quite lucky to be fast-tracked into the first team, but that being said, you’ve got to take your chance and I thought he looked all right when he came on. It was a good, positive debut for him and a proud moment to look back on.”