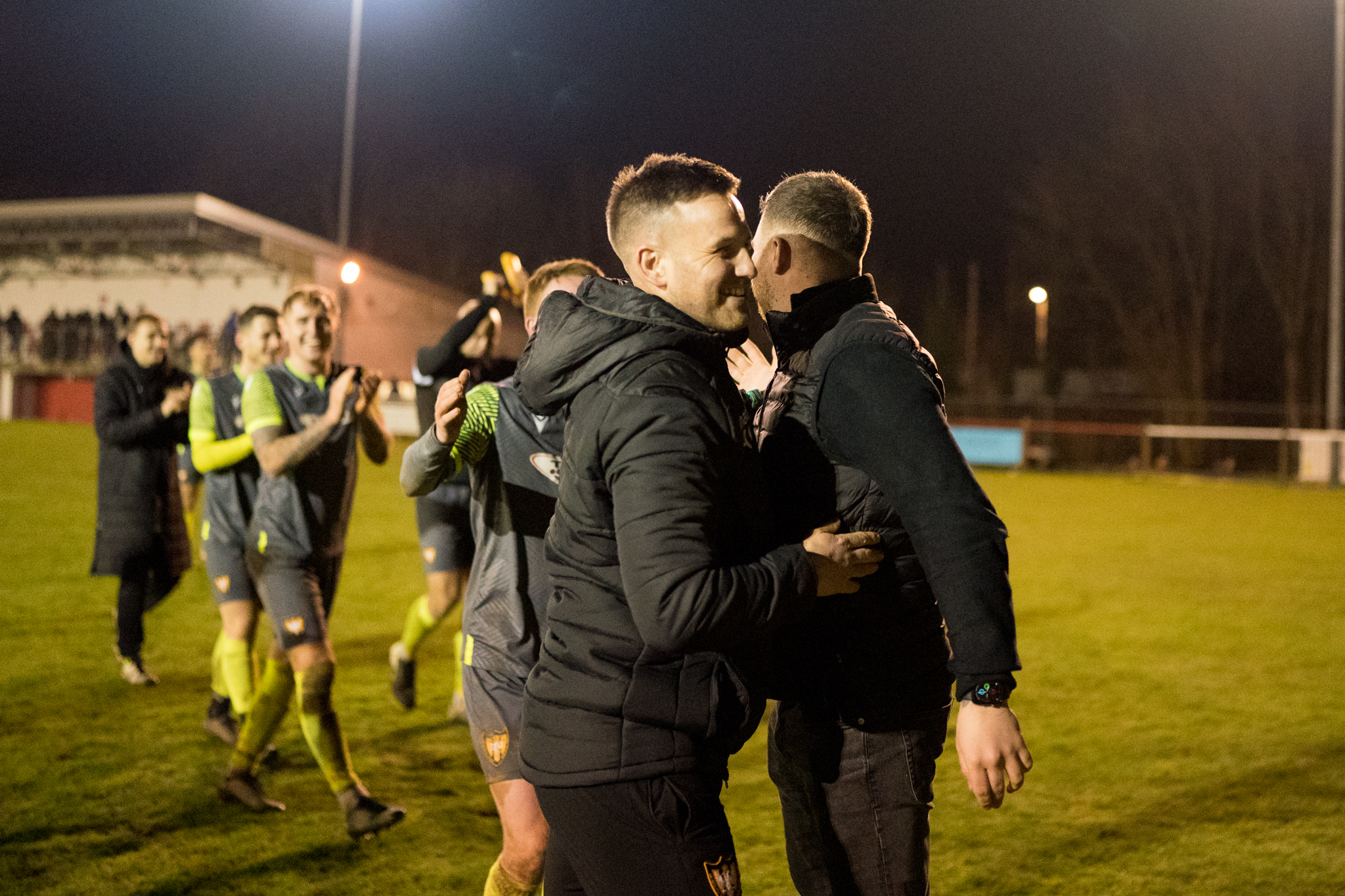 Falmouth Town manager Andrew Westgarth praised his team’s ability to get the job done in ‘challenging’ conditions after his side’s 3-1 win at Sticker on Saturday.

Tom Moxham opened the scoring for the South West Peninsula League Premier West leaders with his first goal for the club before Luke Barner doubled the lead with his 18th of the season to put Town in control at the break.

Luke Brabyn’s 28th goal of the campaign from the penalty spot after the turnaround ensured that Town would be walking away from Burngullow Park with their 25th league win of the season, before Sam Bullen bagged a consolation for the hosts late on.

It means Town are now just nine points away from clinching the SWPL Premier West title, with wins in their next three matches against St Blazey, St Dennis and Penryn Athletic enough to get their hands on the trophy.

“If you look at the last four or five away games that we’ve played, moreso the four in the league, they’ve gone under the radar but all four have been so challenging in terms of wind and conditions,” Westgarth said after the game.

“All this is off the back of the iffy period when we lost to St Blazey and that St Austell win, which is so key when you look back at it. Then Newquay away was windy, bumpy and a really tough place to go; St Austell was so windy and so bumpy; St Dennis, again the pitch was borderline and windy; and Sticker, I was looking forward to playing at Sticker but the conditions were so challenging.

“I think people always say it’s a banker and a guaranteed win, but I have to give the boys full credit because it was a tough place to go. To bounce back from that St Blazey defeat with six straight wins, five in the league and four away, is pretty impressive.”

Much like they had done in each of their previous three matches, Town took control of the game by taking the lead relatively early on through Moxham before Barner quickly added a second, with the league leaders able to manage the game from there on in.

“It’s typical of us,” Westgarth said, “we’re so good at scoring in clusters, so when we do score we then get another one to give us a cushion. It then very much mirrored our other results: we were able to use the squad, see out the game and not force our hand or take any unnecessary risks.

“Don’t get me wrong, if you can go out and score six or seven then obviously that’s great, but at this stage of the season it’s all about protecting the squad. We didn’t need to risk Jack Bray-Evans, we left him on the bench and didn’t need to bring him on. Scott Kellow has had another week off to rest, which is great.

“People will say that’s another routine win, but I can’t comprehend how strong that wind was on Saturday. It was tough, so full credit to the boys.”

Moxham opened the scoring for Town in the first half with his first strike for the club since signing from Newquay in October.

The left-back, who also lists Saltash United among his former clubs, made his first three appearances in amber and black from the bench, but has since gone on to become a regular fixture in the Falmouth line-up, starting 13 of the team’s last 14 games.

Perhaps unsurprisingly for a team that has scored 138 goals in all competitions this season, Moxham became the 16th different player to register for Town this term, leaving only a handful of regular first team players yet to hit the mark for the league leaders in 2021/22.

“I think almost all the boys have picked one up now,” Westgarth said. “Tom Annear scored against St Austell, his first goal of the season. [I think it’s just] Kirk [Davies] and Ade [Thompson] left, we’ve got plenty of time hopefully for them to maybe get one.

“It was a nice finish actually, on the overlap. He got it past his man and fired it into the bottom corner, so a nice finish.”