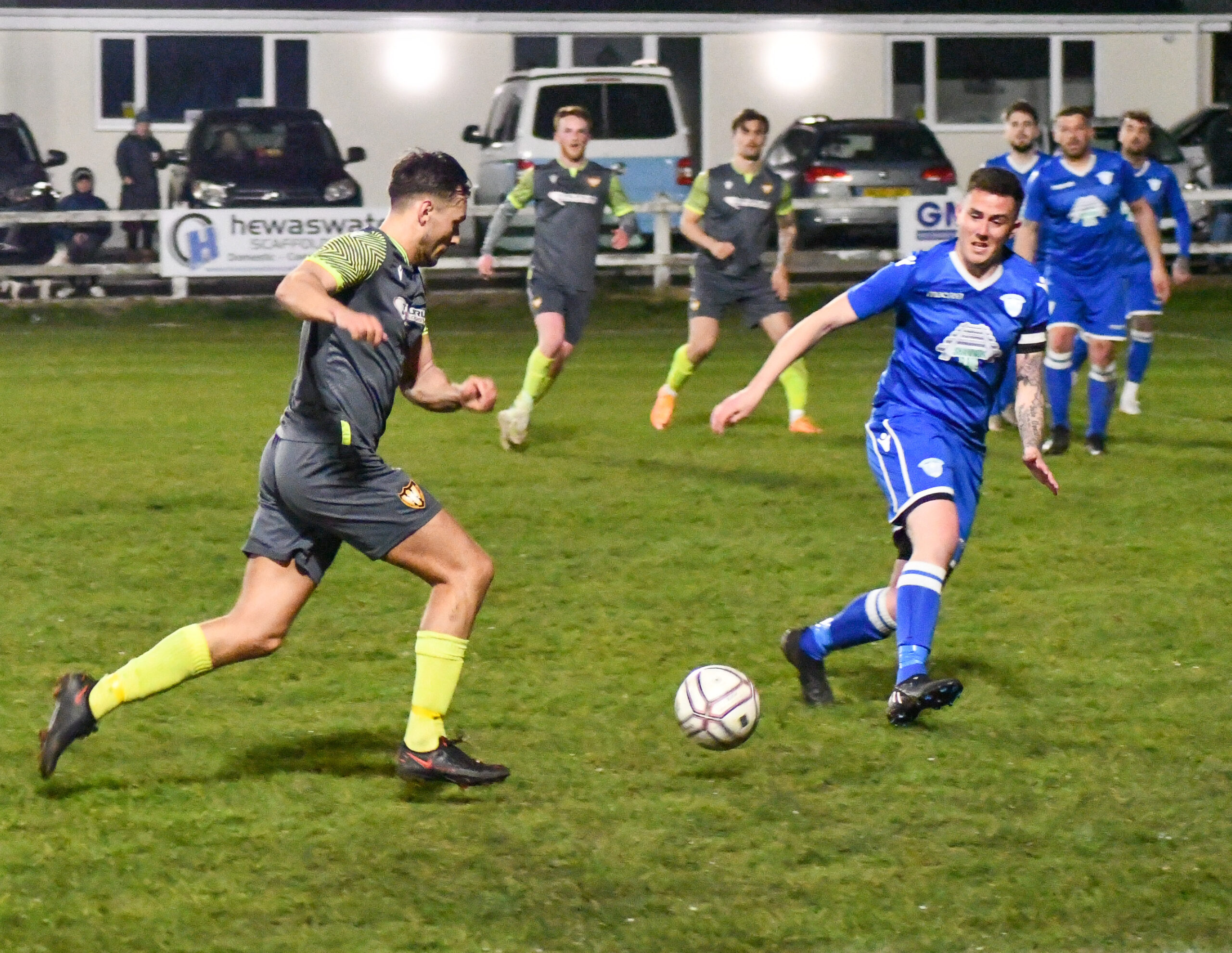 Falmouth Town manager Andrew Westgarth was pleased with his team’s performance in their 4-1 victory at St Dennis on Tuesday night.

A goal from in-form Jack Bray-Evans either side of Alex Wharton’s strike saw South West Peninsula League Premier West leaders Town race into a three-goal lead after only 18 minutes, leading many of those in attendance to wonder what the score may end up as.

But the division’s bottom side never gave up and pulled one back through Jacob Rowe just before the half-hour mark, with a mixture of determined defending and wayward shooting limiting Town to just one more after the break, with Wharton’s cool finish on 66 minutes completing the scoring.

The win – Town’s third successive 4-1 triumph in seven days – means Town are potentially just three wins away from securing the SWPL Premier West title, which they will do if they can defeat Sticker, St Blazey and Liskeard Athletic in their next three outings.

“Again I thought we put away four well-taken goals,” Westgarth said after the game. “Obviously from their point of view there were goalkeeper errors, but we’ve done the job.

“They had one shot on target and that was a goal, which was a nice goal to be fair – Jaffa [Rowe] seems to score every time he plays against us.

“What I would give them is I thought they showed a lot more fight and togetherness than some sides we’ve played this year. They really gave us a game. They were quite hard to break down.

“Overall it was a good performance from us – it wasn’t the prettiest of games by any means but at this stage of the season it’s just about the three points.”

Wharton was making his first start since Town’s 4-0 win at Newquay in the Cornwall Senior Cup, having appeared from the bench in seven of the eight matches in between, and rewarded Westgarth with a man-of-the-match display.

Wharton enjoyed an impressive evening on the left side of Town’s front line, scoring with two well-taken strikes, which could have been three on another day, and was a lively focal point of the visitors’ attack throughout.

“I’m absolutely delighted for Alex Wharton because he’s had a few injuries throughout the season and I thought he looked electric last night [Tuesday],” Westgarth said. “He took both his goals really well, he was a constant threat and was very unlucky not to get a hat-trick.

“I felt sorry for Alex. He started the season so well then got injured in the Godolphin game [5-0 win in September] just before we signed Jack [Bray-Evans]. He’s always been in and out of the side in that he gets back in and then gets injured or goes away, and then obviously the other guys – [Tim] Nixon, [Luke] Brabyn and [Luke] Barner – are flying, so it’s hard [to regain his place].”