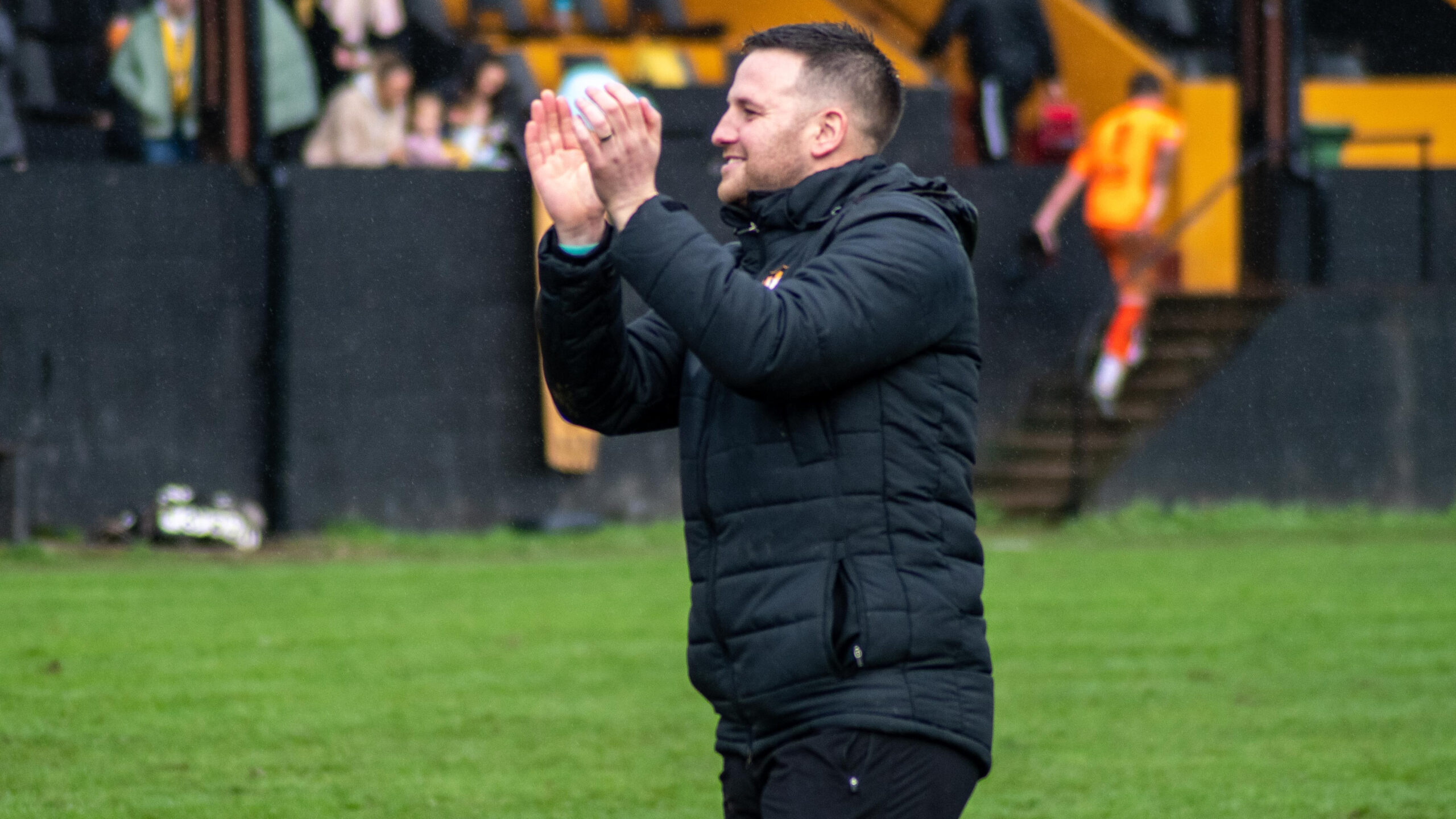 Falmouth Town manager Andrew Westgarth hailed 2021 as a ‘great’ year for his team following his side’s 5-0 victory over Penryn Athletic in their final match of the year on Boxing Day.

Jack Bray-Evans bagged a fantastic four-timer, including a memorable volley early in the second half, and Toby Clark recorded his first of the campaign as Town ran out five-goal winners in front of a South West Peninsula League record crowd of 1,171 at Bickland Park.

The win extends Town’s perfect league record to 18 victories in as many games so far this season and stretches Town’s advantage over second-placed Camelford to 17 after the Camels were without a game.

“I think we started the game pretty slowly,” Westgarth said at full-time. “I wouldn’t say we were awful, but we just couldn’t get going and it was a bit of a bitty first half. They probably had a game plan of just sitting in and seeing if they could just catch us on the break.

“They offered very little going forward and it was just always going to be a case of once we got the first goal could we go on and get the second and see the game out? From the sideline watching, we felt very comfortable all game, really.”

He added: “It’s been an odd year with covid. At the start of the year we didn’t kick a ball, so it’s been bizarre. To do what we’ve done is brilliant and we’ve just got to keep ticking them off. Some of the football we’re playing now, you can just feel it building momentum. It’s a great time to be at the club and it’s been a great 2021.”

Bray-Evans stole the show on Boxing Day with a fantastic four-goal haul, taking his tally since joining the club from Newquay in September to 14 in 12 games and 26 in 22 for all teams across the 2021/22 campaign.

After opening the scoring late in the first half, the in-form frontman submitted a contender for goal of the season with a fantastic volley within two minutes of the start of the second half, before going on to net twice more to complete a fine individual display.

“He’s been a great signing for us,” Westgarth said. “I’ve mentioned it a few times how many first goals Jack gets and I thought that was a great goal: really good centre-forward play, held off the defender and a great finish.

“His second goal was an absolute worldie, his third goal was a great little one around the corner, [Luke] Barner’s flicked it on and he could easily have blown it over the bar but he’s just side footed it in for his hat-trick, and then his fourth goal he scored from distance.”

Westgarth was keen to praise his whole squad, noting substitutes Marcello Jones and David Broglino and skipper James Ward for their contributions, but reserved special mention for Ward’s central defensive partner Clark, who notched the second goal of the game and his first of the season.

Clark, who turns 41 in a couple of weeks, was initially persuaded to come out of retirement by Westgarth in 2019 as short-term cover, but is now a regular fixture in the sturdiest defence in the SWPL.

“I’m absolutely delighted for Toby,” Westgarth said. “Three seasons ago he was retired and in Tesco on a Saturday and now he’s playing in front of 1,100 people and scoring the important second goal in a big derby Boxing Day game.

“I think he’s been a credit to everyone at this club: how he conducts himself, how he looks after himself. If anybody thinks their career is going slightly downhill in their thirties, look at Toby for inspiration.”

A remarkable four-figure crowd packed into Bickland Park to witness the five-goal triumph, with the attendance figure of 1,171 smashing the previous SWPL best of 737, set in the Boxing Day clash between Newquay and Godolphin Atlantic in 2008.

It was an occasion and an atmosphere that will live long in the memory of those who were there, and Westgarth was keen to note those members of the F-Troop who have played a big role in achieving the landmark.

“I’m just so proud of the club,” he said. “I’m so proud of Beardy, Donald, Jeff, Kerry, Kepps, Big John and John Perrow – the work they do [is amazing]. You look at it today with the new ball stand, the flags, the charity money they make, I’m pleased for them because they wanted this as much as we wanted the three points. They are an absolute credit not only to the club but the town.”