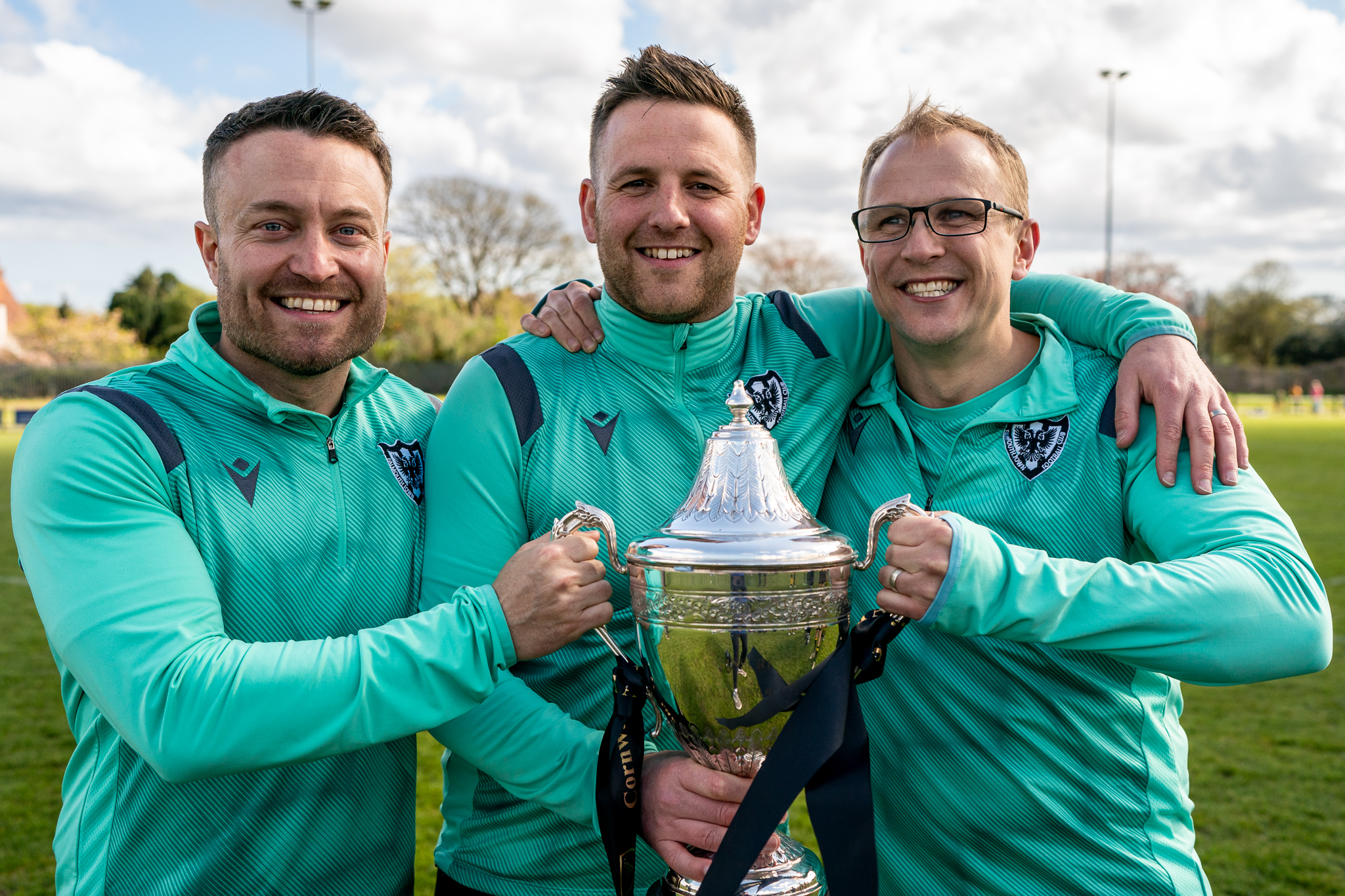 It is double delight for Falmouth Town manager Andrew Westgarth after his side retained the Cornwall Senior Cup on Easter Monday.

Jack Bray-Evans scored the only goal of the game as Town defeated Wendron United 1-0 at Poltair Park to retain the trophy they won in 2019 – the last time the competition was played following two cancellations due to the outbreak of coronavirus.

It completed a memorable bank holiday weekend that saw the team achieve a league and cup double, having clinched the South West Peninsula League Premier West title on Good Friday.

Bray-Evans’ goal provided a rare moment of quality in a match that won’t live long in the memory, but that won’t have mattered to Westgarth, who was thrilled to get his hands on the trophy once again.

“The game itself was awful. That’s probably the worst I’ve seen us play all season,” Westgarth said at full-time. “We just couldn’t get going, we started the game so poorly, Wendron hit the bar after a couple of minutes and Kian [Thomas] had a massive chance, and we could have easily found ourselves two or three goals down.

“We just couldn’t get going, I don’t know what it was, but that man Jack Bray-Evans, that’s what we brought him to the football club for, the big games. [He provides] that one bit of magic and he scores from quite an acute angle.

“Overall, I’m absolutely delighted to win the double and win the Senior Cup for a second time. No-one is going to look back in 10, 15 years’ time, they’ll just remember the winners and the title.”

Town skipper James Ward had the honour of both lifting the coveted trophy and receiving the man of the match award for a fine display at the heart of the champions’ defence.

Westy paid tribute to his captain, who has also weighed in with 13 goals for the Bickland Park outfit, but reserved the most praise for his entire squad.

“Wardy’s had an unbelievable season,” he said. “It’s not just Wardy today, I think all the boys at some point in the season have all played a massive part. You could list the games off, they’re endless.

“Every single player should be proud of their efforts this year. To do what we’ve done, we’ve been so consistent and today feels like the icing on the cake.”

The F-Troop were the stars of the show once again with the Falmouth Town supporters, who were responsible for the majority of the whopping 1,298 attendance, lighting up Poltair Park into a sea of amber and black.

Town sold out four double-decker buses, that travelled from Falmouth to St Austell, more than two weeks before the final, such has been the support for the team, and Westgarth dedicated the cup final victory to those who have followed the side over the last few years.

“The league was the main thing, that was the target from day one, and today was for them,” he said. “Jon Perrow, organising all those buses, that in itself is a task – 300 people on a bus to get from Falmouth to here and once they’ve had a few ales they’re all oiled up.

“It’s a sea of colour and I’m just a bit gutted that we didn’t score in front of them. It’s a colossal effort and one I’m immensely proud of, on and off the field.”