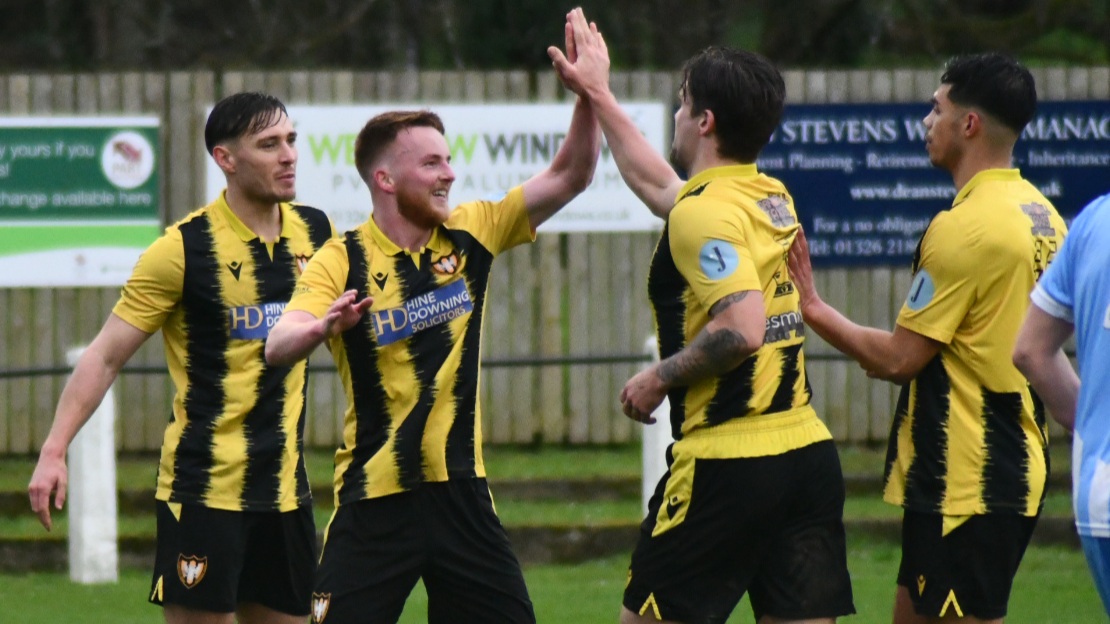 Godolphin, who sit third from bottom, remained on level terms with the league leaders until the 63rd minute, but the unbeaten table toppers showed their title credentials with a devastating display of finishing, scoring six times in the last 37 minutes to secure their 20th win from 20 league outings.

Luke Barner gave Town the lead in what was their first game at their Bickland Park home this year, but Archie Ward’s finish ensured Adam Paterson and Josh Stockdale’s side would head into the break on level terms.

Town had to wait until just after the hour for Tim Nixon to restore their lead with a fortuitous deflected strike from distance, with Luke Brabyn making it 3-1 from the spot less than two minutes later.

Barely another two minutes had elapsed before James Ward nodded in his 11th goal of the season, with Alex Wharton, fresh from the bench, swiftly firing in the hosts’ fifth to complete a devastating eight-minute spell.

Jack Bray-Evans got in on the act with a sublime free-kick in the 83rd minute, and there was still enough time for the prolific frontman to head home his 30th goal of a fantastic campaign.

Andrew Westgarth’s side have now taken the maximum 60 points from their first 20 games this term and are now 17 points clear of second-placed Liskeard Athletic, who were held to a 1-1 draw at St Austell.

Almost six weeks had passed since Town’s last home game – a 5-0 win over Penryn Athletic on Boxing Day – and they wasted little time in embracing home comforts once again, with Barner and Bray-Evans both testing visiting gloveman Dan Peters inside a rainswept opening ten minutes.

The two then combined for the opening goal just before the 15-minute mark. Bray-Evans was sent through on goal and Peters raced out to block the forward’s attempted lob, but the ball fell kindly for Barner to sweep into the unguarded net from the edge of the box.

Godolphin then began to get a grip on the game with skipper Josh Pope blazing over from a promising position, and they managed to level the score with their next attack on the half-hour. Winger Matty Walker, brother of Town man Olly, made an enterprising run along the left of the box before delivering a cross for Archie Ward to turn past Ryan Barnes from close range.

The goal silenced Town for a brief period before the home side cranked up the pressure in the final minutes of the half, with Peters managing to bat away Bray-Evans’ driven effort before Barner blazed his strike over the crossbar.

It was the visitors who almost took the lead just before the interval, however, with Francis Pengelly’s inviting, low cross just evading team-mate Walker at the back stick with the goal gaping.

Perhaps unsurprisingly, Town flew out of the traps in the second half and came agonisingly close to getting their noses back in front in the 48th minute. Brabyn worked his way to the right corner of the box and picked out Bray-Evans at the far post, who contrived to send his header wide of the mark.

Bray-Evans and Nixon were both off target shortly after and were almost made to pay for their profligacy when Eli Evans sent a powerful effort at goal for the visitors, only for Barnes to pull off a fine stop to keep his side on terms.

That proved crucial as Town finally regained their lead three minutes later. It came in fortuitous fashion too, with Nixon’s effort from outside the box taking a wicked deflection and looping over the helpless Peters and into the back of the net.

There was hardly time to take a breath before Town regained possession from kick-off and Barner surged into the box, where he was taken down by the Sky Blues custodian. Referee Neil Hunnisett had no hesitation in pointing to the spot, and Brabyn found the bottom right corner with his effort to claim his 24th goal of the campaign.

Town had their tails up and three quickly became four. Their next attack yielded a corner with Broglino’s delivery being met by the head of Ward, who thundered the ball past Peters for the 11th goal of a prolific campaign for the centre-half.

That was instantly followed by the hosts’ first change of the afternoon, with Wharton replacing Nixon on the left flank. It took little over three minutes for the winger to make an impact, with Broglino teeing up the former Helston Athletic man inside the box, who rifled the ball past Peters from ten yards.

The last 15 minutes was about damage limitation for the G, with Peters doing well to prevent what would have been a certain sixth, standing strong to save from Bray-Evans in a one-on-one. Broglino then shot wide before Wharton’s low cross across goal just evaded the feet of Barner.

A sixth felt like it was coming and it duly arrived in superb fashion seven minutes from time. Town won a free-kick roughly 25 yards from goal, with Barner and Bray-Evans entering into a discussion as to who would do the honours. The latter got the nod, and he proceeded to bend the ball beautifully into the left corner for his 29th of the campaign.

There was still time for 29 to become 30, and Bray-Evans soon reached that milestone just four minutes later. Barner, who had started the scoring in the 14th minute, played a pivotal role in rounding off, delivering an inch-perfect ball for the unmarked Bray-Evans to power home a header to round off a breathless second half.