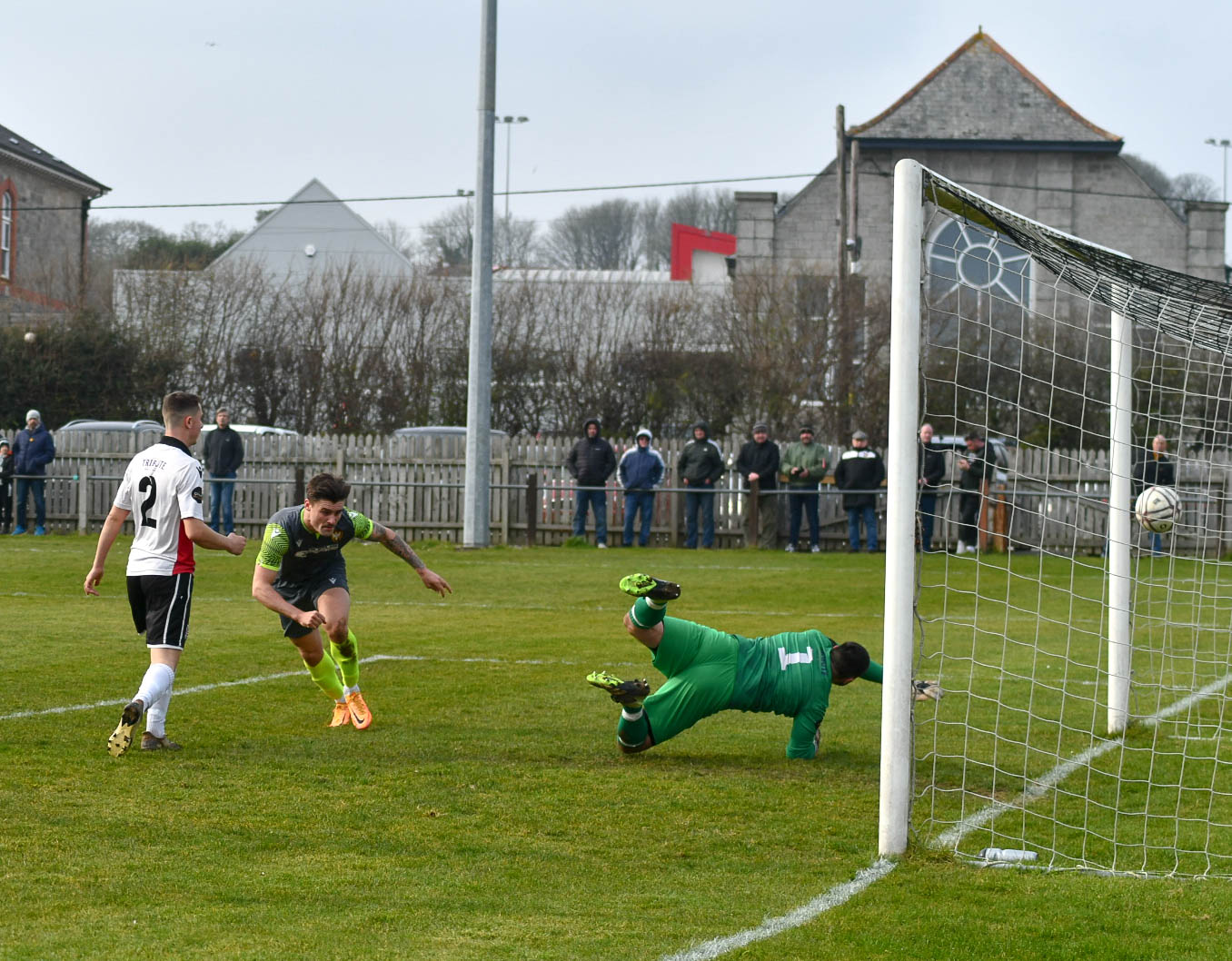 The home side’s cause was not helped by playing the majority of the second half with ten men after custodian Brett Allen saw red for dissent, straight after Jack Bray-Evans had netted Falmouth’s third strike.

This goal and Allen pressing the self-destruct button ultimately swung the momentum firmly in Town’s favour after they just about edged the opening stanza.

Tim Nixon, who was outstanding throughout and a constant threat in the Lillywhites’ half, opened the scoring early in the piece with Bray-Evans doubling Town’s tally. However, St Austell hit back just before the break when Connor Paine headed home.

Bray-Evans restored Town’s two-goal advantage and late on, Tom Annear put gloss on another polished performance from Andrew Westgarth’s side with a fourth goal.

Before Falmouth successfully maintained their 100 per cent away record in the league, Bickland chief Westgarth named an unchanged line-up from the side that defeated Dobwalls 4-1 to make the Cornwall Senior Cup final on Tuesday evening.

There was also a place amongst the substitutes for promising youngster Jasper Turner, who would make his first team bow in the second half.

The two sides met just three weeks ago in TR11 with St Austell proving a tough nut to crack with Luke Brabyn’s penalty in the dying embers securing a 2-1 victory. With home boss Mark Smith returning to the dugout after a sabbatical away working in Portugal, another tough afternoon was expected for Town.

Under clear skies but with a chilly easterly wind blowing, the game was scrappy throughout the opening exchanges but Town finally settled and after Bray-Evans went close, Nixon opened the scoring after 10 minutes.

Barner broke free and after he advanced into the Lillywhites’ 18-yard box, the ball was squared to Nixon who rolled past Allen with aplomb.

Barner and Nixon then combined again shortly after the opener with roles reversed and the former shot just wide.

St Austell finally showed as an attacking threat as the game passed the 20 minute mark with pacy winger Cam Bidgood looking like being the hosts’ most likely passage to visiting stopper Ryan Barnes’ goal. On two separate occasions, Bidgood got the better of Town full-back Kirk Davies but his final product was lacking and Town’s 1-0 lead remained intact.

As the interval approached, Bray-Evans then doubled Falmouth’s advantage when he headed Barner’s pin-point cross down and past Allen.

If Town thought they had one hand on another three points there and then, St Austell had other ideas and Connor Paine halved the deficit by heading home a Bidgood corner three minutes before the turnaround.

After the break, Bray-Evans cooly found the mark for his second and Falmouth’s third and it was certainly advantage to the visitors. But the probability of a St Austell comeback was then virtually eradicated to zero when Allen completely lost his cool and for something he said to referee Tom Anstice-Mitchell, was asked to spend ten minutes in the sin-bin.

As Allen was trudging off, he then appeared to continue his disdain towards the man in black and a yellow card soon became red.

Almost immediately, 22-goal Bray-Evans was withdrawn and replaced by Alex Wharton as Town looked to give a well-deserved break to their star turn, who joined the club in October 2021.

Powell produced a wonderful save to deny Barner with Broglino striking the woodwork as Town searched for a fourth with 15 minutes left.

The ten-men of St Austell finally saw their rear guard breached again as time ticked down when Annear’s speculative cross caught the wind and despite getting a hand to the ball, it nestled in the net.

That was the last goalmouth action of note as Town saw out the final throws with ease and with Liskeard only able to draw 2-2 at home to St Blazey, Westgarth, his players and the loyal F-Troop following now know that four more victories will see promotion to the Western League secured.