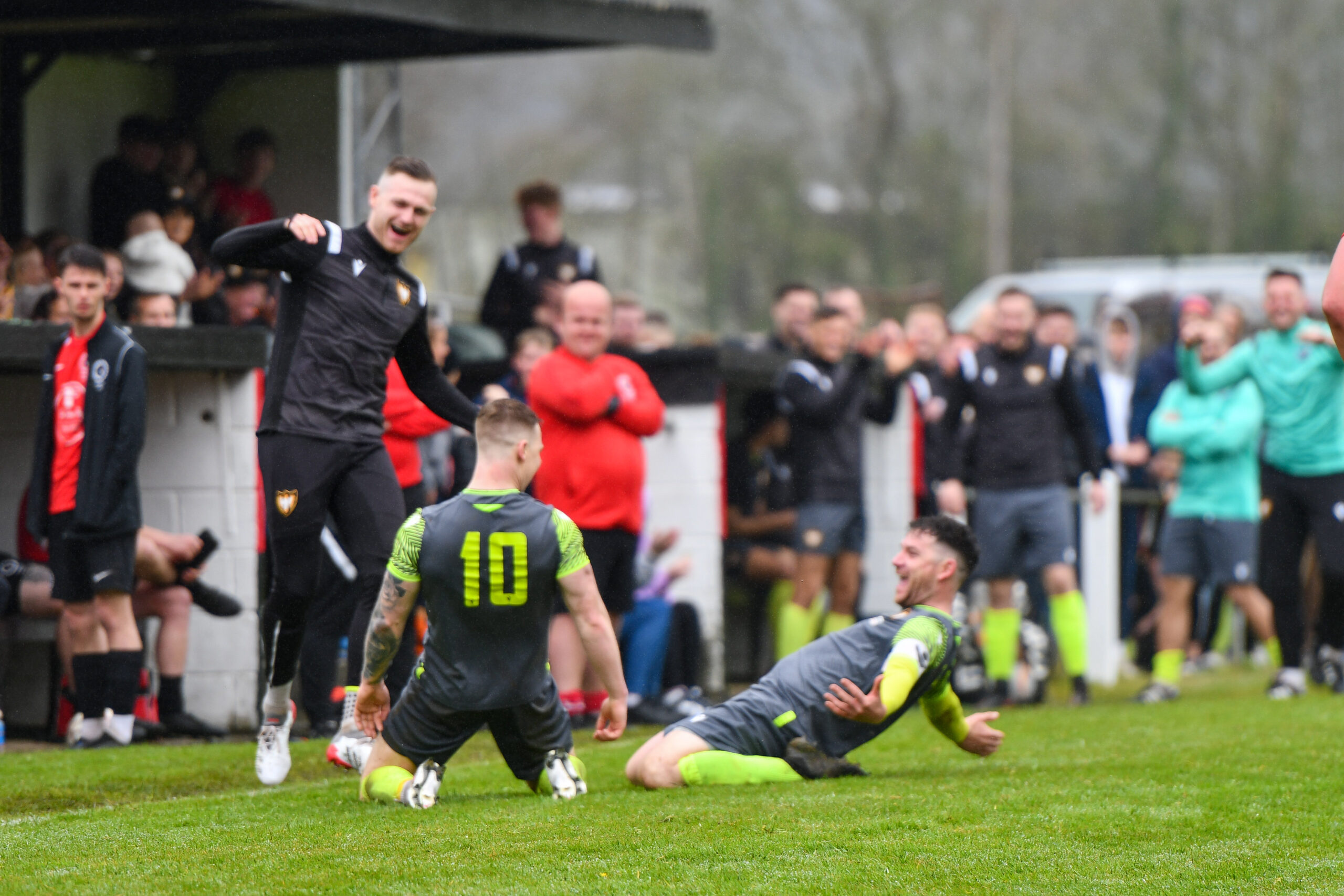 Knowing they needed just one more point to be crowned South West Peninsula League Premier West champions, goals from Alex Wharton, Olly Walker and Jack Bowyer earned all three for Andrew Westgarth’s side as they won the title in style.

Wharton opened the scoring shortly before half-time in front of a bumper Bank Holiday crowd at Kernick Road. Jack Rapsey levelled for the hosts a few minutes into the second half, only for Walker to restore Town’s advantage almost instantly with a fine finish.

Bowyer was on hand to make it three with another smart finish, and while Ryan Reeve halved the deficit in stoppage time, it was to be a mere footnote before the final blast of referee Darren Gay’s whistle started the celebrations.

With the Cornwall Senior Cup final against Wendron United coming up on Easter Monday, Westgarth made eight changes to the side that won 4-0 against St Dennis six days earlier. Ollie Moody, Jamie Ware, Ade Thompson, Scott Kellow, Jack Webber, Charlie Edney, Jack Bowyer and Olly Walker were the players to come into the side.

It may have been a heavily altered side but Town went about their business in the same way as always and came close to opening the scoring early on when Wharton squared to Bowyer, who cleared the crossbar with his effort.

Alex Hayhoe spurned a good chance at the other end, slicing well wide from the rear of the box, before Bowyer turned provider for Walker, who found the side netting.

Home gloveman Ethan Elwell thrust himself into contention for man of the match with three vital stops, first denying Walker with a one-on-one and then blocking Bowyer’s effort before tipping away Scott Kellow’s close-range strike from point-blank range.

But the visitors’ pressure eventually told shortly before the interval as Wharton nudged the champions-elect in front. Bowyer raced down the right flank and his teasing cross was swatted away by Elwell, only for Wharton to rifle the rebound home from ten yards.

Having had 15 minutes to dwell on that goal, the hosts found the perfect response within two minutes of the restart. A dangerous corner delivery was met by Rapsey, whose header flew past Town custodian Zach Telling.

But the league leaders showed just why they were less than 45 minutes away from being crowned champions as they restored their lead virtually seconds after the restart. Walker saw space open up in front of him as he received the ball on the edge of the Penryn box and unleashed an unstoppable dipping half-volley into the opposite corner.

That settled Town back down and they found themselves three goals to the good shortly after the hour. Bowyer, who had come close only a few minutes earlier, did brilliantly to sell the Penryn defender a dummy before rifling the ball across the face of goal and into the far corner.

With the visitors closing in on the three points and the championship and the F-Troop in party mode on the sidelines, Westgarth opted to give former Penryn duo Ryan Martt and James Miller a run-out in the dying minutes, replacing Moody and Edney respectively.

Penryn top-scorer Reeve was keen to find his 14th goal of the season, and after seeing an attempted lob drop just wide and another strike fly inches over the bar, he got his goal in stoppage time, poking the rebound over the line from close range after Telling had made a good initial stop.

It was immaterial in the grand scheme of things, with the final whistle a minute later signalling both victory on the day, and an end to Town’s 22-year wait for a league title.