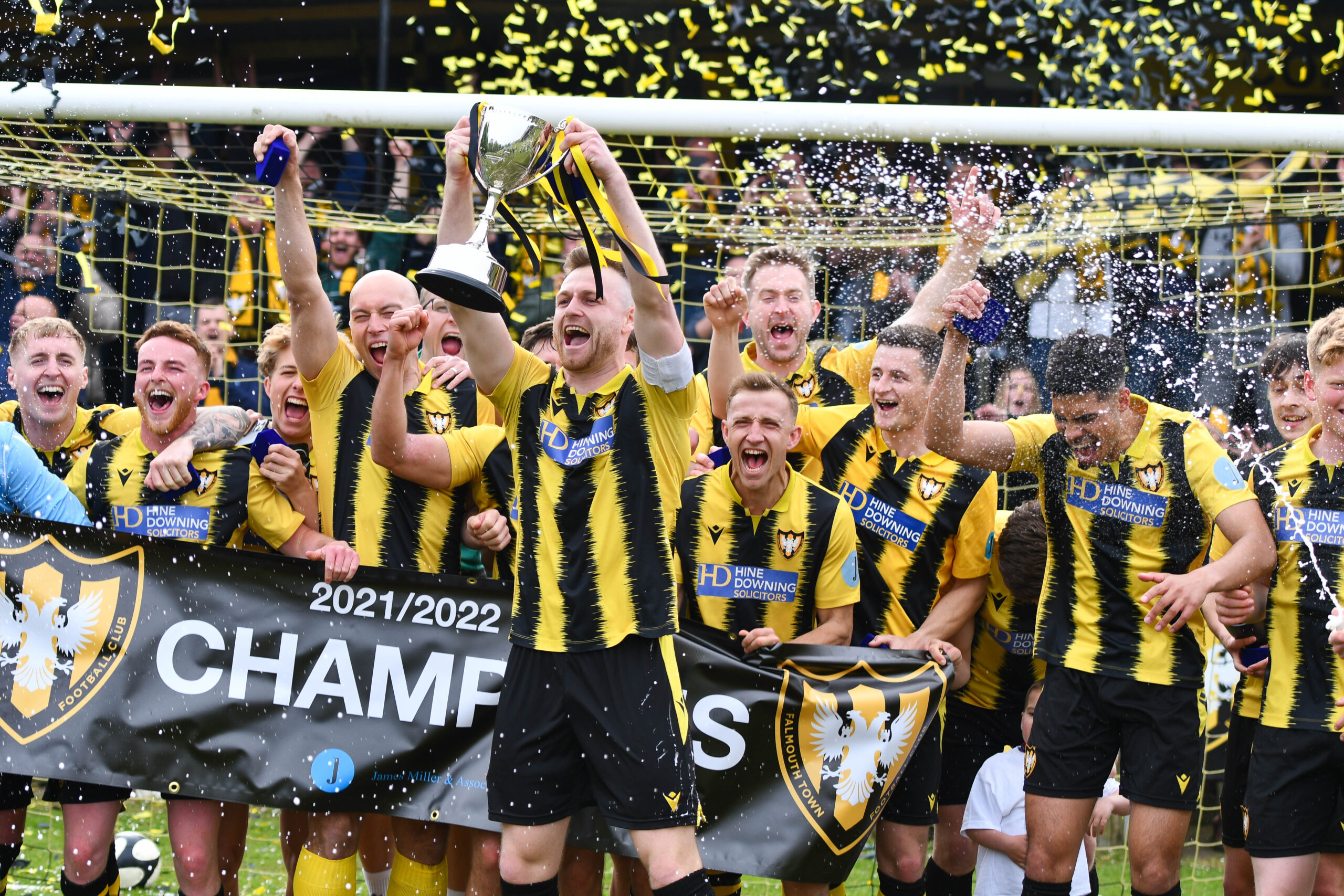 Jack Bray-Evans scored a hat-trick as Falmouth Town cruised to a 6-0 victory over Dobwalls in their final league game of the season.

David Broglino bagged a brace while Luke Barner rounded off the scoring as the South West Peninsula League Premier West champions capped off a memorable season with an emphatic win in front of their own fans at Bickland Park.

The final whistle kicked off a wonderful series of celebrations on the pitch and amongst the stands, with Town skipper James Ward becoming the latest Falmouth captain to walk up the famous grandstand steps and collect the league trophy.

Bray-Evans’ treble puts him three goals clear at the top of the west division goalscoring charts, with only St Blazey’s Liam Eddy able to catch the Town man if he scores five goals in next weekend’s Walter C Parson League Cup final.

Town chief Andrew Westgarth made three changes from the side that drew 0-0 at home to Liskeard Athletic in midweek, with Jamie Ware, Luke Brabyn and David Broglino coming in for Ade Thompson, Kirk Davies and Tim Nixon.

There was a party atmosphere inside Bickland Park before kick-off, but Town were clearly keen to ensure that their energy on the pitch matched that of the supporters and got off to a bright start. Dobwalls ‘keeper Jordan Duffey did well to save Bray-Evans’ early strike before Barner struck the crossbar from the resulting corner.

The lively Falmouth duo continued to keep the visiting custodian on his toes, with Bray-Evans having a header saved before Barner sent a shot straight at the goalkeeper, while Ray Spear tested Ryan Barnes at the other end after fellow Reds man Tornado Bello’s strike was deflected wide.

A goal was coming and it was the 31-goal top-scorer Bray-Evans who notched his 32nd of the campaign ten minutes before the break. Mere hours after Bodmin Town man Dan Jennings bagged a four-timer to draw level with him at the summit, Bray-Evans raced clear of the defence and stroked the ball past Duffey to move one clear once more.

The hosts’ next meaningful attack yielded a second goal five minutes before half-time, with Bray-Evans turning provider to chip the ball towards Broglino on the edge of the box. The midfielder did the rest, controlling the ball with his chest before rifling it past Duffey for his 16th goal of the season.

There was barely any time to settle in for the start of the second half before the back of the Dobwalls net bulged once again. A through ball found Broglino in acres of space on the left flank, with the midfielder’s trademark precision from distance on display again as he arrowed the ball into the net from 20 yards.

Town were now firmly in the groove, and just two minutes after having a header cleared off the line, Bray-Evans had his name on the scoresheet again. Barner was the one to burst through the Reds defence this time before squaring to his team-mate who fired in his second of the game and 33rd of the campaign.

The champions were looking like scoring every time they came forward, and sure enough, 4-0 became 5-0 in the 53rd minute as Bray-Evans completed his second hat-trick in Town colours. Broglino’s corner delivery found the head of Ward, who nodded the ball down to Bray-Evans, with the lethal marksman firing home from close range.

Ward came close himself shortly after with a bullet header that was well saved by Duffey, but it wasn’t long before the visiting backline was breached for a sixth time. Luke Brabyn was the architect this time, coming from the right and rolling it through to Barner, who strode into the box and guided the ball past Duffey.

With the game long since in the bag, Westgarth rung the changes with Nixon, Ryan Martt and Charlie Edney coming on, and the latter soon came within a whisker of adding a seventh with Duffey able to tip the youngster’s close-range effort wide.

Nixon and Edney almost combined for goal number seven late on only for Edney to be denied by a crucial challenge, with the hosts having to settle for a superb six as they bade farewell to the SWPL in style.