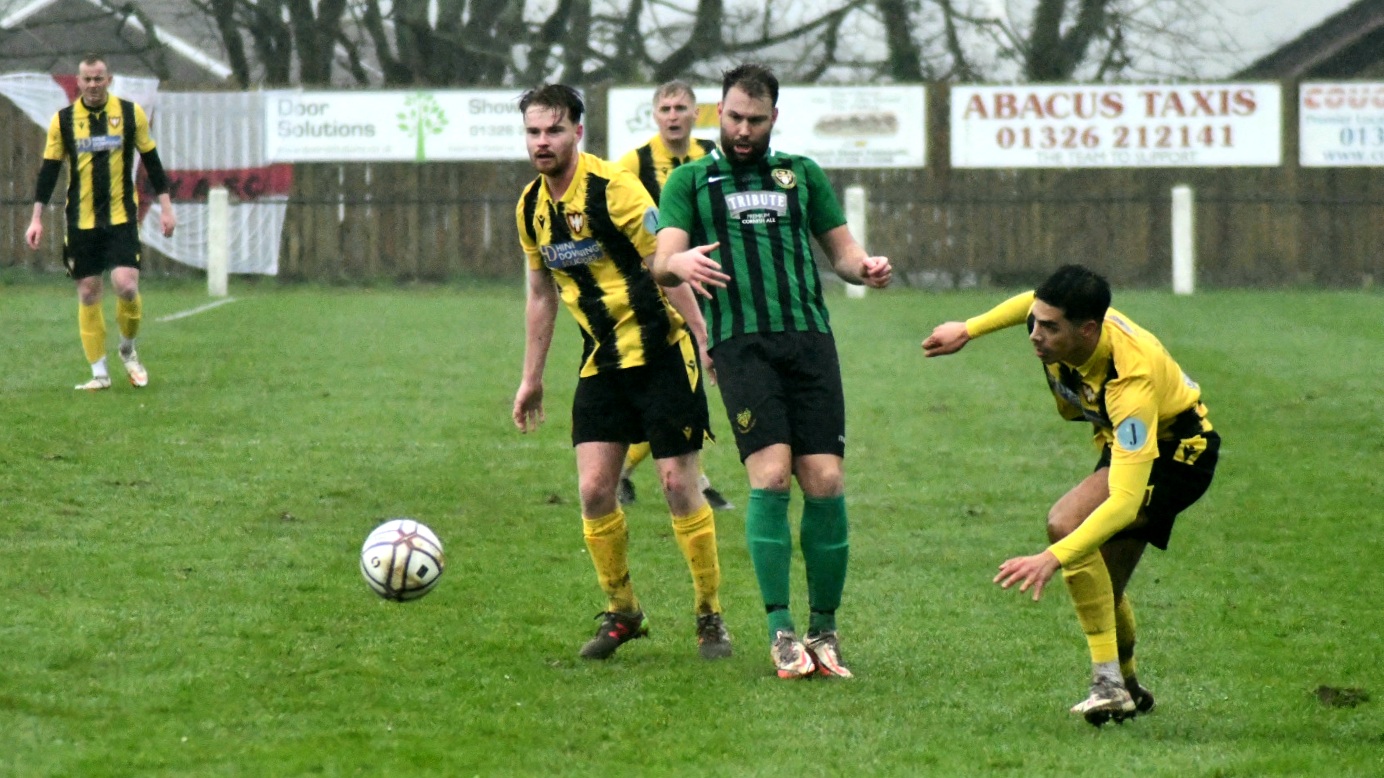 Luke Brabyn opened the scoring for the league leaders in awful conditions at their Bickland Park home, but Eddy restored parity before the break with a deflected strike late in the first half.

Blazey’s former Falmouth captain Joe Cooper marked his return to Bickland by nodding his new side into the lead early in the second half, and while Brabyn got the hosts back on terms with his 26th of the season, it was the in-form Blazey hitman Eddy who scored what proved to be the winner, prodding over the line from close range to secure a memorable victory for the Green and Blacks.

The defeat means Town’s long unbeaten run, that has seen them win their first 20 league games of the season, is finally over, with their lead at the top of the west division being cut to 14 points following second-placed Liskeard Athletic’s 3-1 victory at Penryn Athletic.

The Green and Blacks ignored the elements to descend on Bickland Park in their numbers on a special afternoon that also saw the reunion of Town’s treble-winning team of the 1996/97 season.

Falmouth enjoyed the brighter start on a damp afternoon in west Cornwall and passed up a big chance to lead in only the seventh minute, with Tim Nixon’s cross teeing up Jack Bray-Evans, whose diving header flew narrowly over Chapman’s crossbar.

Tom Annear almost picked out Luke Barner with a cross shortly afterwards before the hosts did get their noses in front in the 16th minute. Nixon found space at the byline to deliver a cross back inside which evaded the visiting defence, and Brabyn was on hand to smash the ball into the net from the centre of the box.

St Blazey looked to respond quickly with Kyle Marks forcing a save out of Ryan Barnes from distance before Callum Kenny struck the wall with a free-kick in a good position, while Cooper’s tame header was claimed by the Falmouth gloveman.

The visitors soon turned that pressure into an equaliser and it came eight minutes before the break. The dangerous Eddy, who had plundered five goals in Blazey’s previous two games, ran at the home defence before cutting onto his right foot and letting fly from 18 yards, with the effort taking a deflection and nestling in the bottom right corner.

Looking to restore their lead before the interval, Town piled on the pressure in the final minutes of the first half, with a green and black leg just managing to block Nixon’s dangerous cross before Barner could tap in, before Jack Webber and Nixon both missed the target with their respective efforts.

Falmouth began the second half as they did the first and attempted to take the game to their opponents, with Barner spurning a golden chance within two minutes of the restart when he broke through and rolled his shot the wrong side of the far post.

Town were made to pay for that five minutes later as Lafferty’s men took the lead. Kenny’s free-kick from the left flank was met by former Falmouth skipper Cooper, who marked both his return to the club and his birthday by nodding the ball past Barnes and into the bottom corner.

All of a sudden the visitors smelled blood and were inches away from scoring a quick third in the next attack, with Kenny winning the ball in space on the edge of the box and curling the ball out of the reach of Barnes and onto the roof of the net.

Eddy soon saw his next effort flash across the face of the hosts’ goal before Bray-Evans almost levelled in sensational style at the other end. Spotting Chapman off his line, the free-scoring forward sent a dipping half-volley over the stranded goalkeeper and mere centimetres over the crossbar.

Barner and Town could have been forgiven for thinking it wasn’t going to be their day shortly after when the Falmouth man bore down on goal and slotted past Chapman, only for the ball to get caught up in the mud and trickle against the far post before being hacked away by a visiting defender.

But their next opportunity four minutes later produced the all-important equaliser with a fine move that belied the awful conditions underfoot. A nice passing move saw Barner play it inside towards Brabyn, 15 yards from goal, who shimmied onto his left foot and stroked the ball into the bottom corner for his second of the afternoon and 26th of a prolific season.

The visitors seeked to regain the initiative as the game entered the final quarter of an hour, with a vital block denying Olly Brokenshire from close range before Kenny curled inches wide of the far post from the edge of the box.

Jack Webber has proved to be the man for the big occasion for Town in the past, and it looked as if he was set to score another pivotal goal when his effort appeared to be destined for the far corner, only for a diving Chapman to palm the ball to safety.

The decisive blow of an enthralling game came only two minutes later, but it came at the wrong end from the home side’s perspective. The hosts gave away a cheap free-kick and Kenny’s delivery led to pinball inside the box, with the ball falling kindly for Eddy at the back post to gleefully smash home from a yard out.

Now chasing a second successive hat-trick, Eddy was soon denied by a vital block before sending another effort straight at Barnes as the away side looked to put daylight between them and their lofty hosts.

Another cheap free-kick, this time conceded by the visitors, handed Town a useful chance on the edge of the box after Bray-Evans had been impeded. But with time running out, Bray-Evans’ dead-ball effort sailed harmlessly over the crossbar to the delight of the travelling supporters behind the goal.

Town threw men forward in the dying embers to try and force an equaliser, but that left them exposed at the back and Eddy almost took full advantage in the final minute of the 90. A through ball sliced open the defence and Eddy nipped in to meet it, only for the quick-witted Barnes to rush out and smother the ball before the visiting forward could poke it past him for a third time.

The league leaders, sensing their unbeaten record slipping away from them, forced a couple of corners in the final seconds of stoppage time in a desperate attempt to find a leveller, but the Blazey defence held firm before the final blast of referee Shaun Edge’s whistle finally confirmed the end of Town’s invincible league campaign.