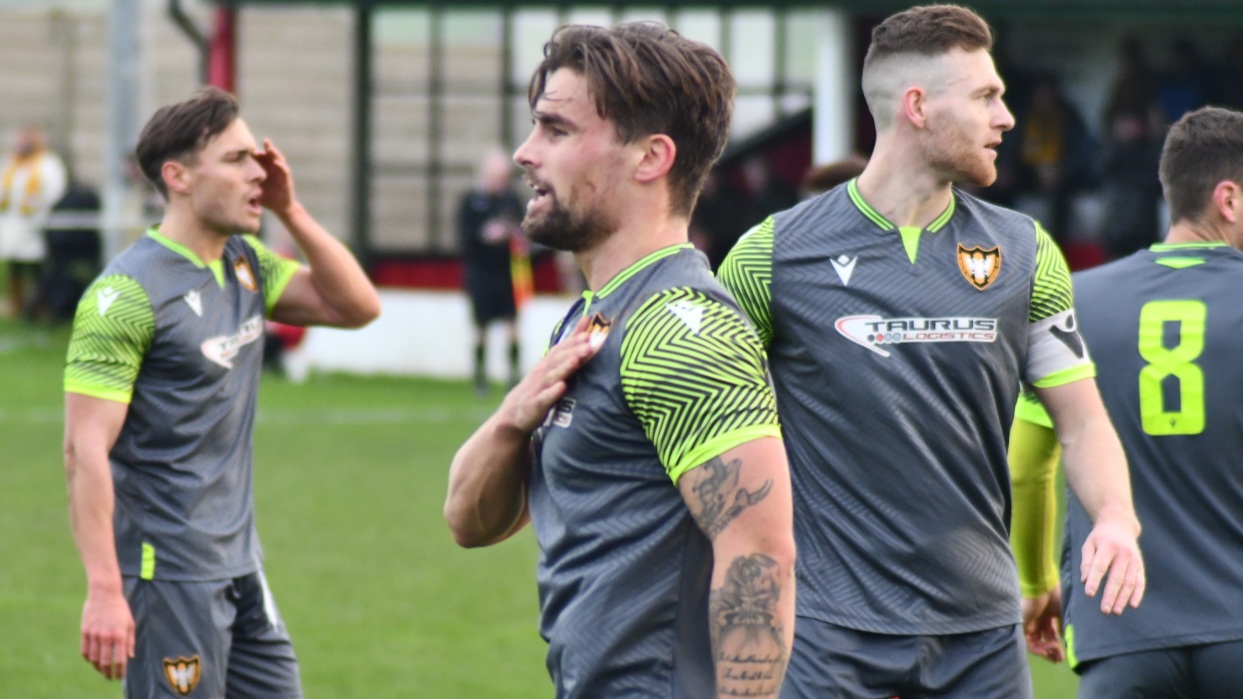 Jack Bray-Evans scored against his former club as Falmouth Town booked their place in the semi-finals of the Cornwall Senior Cup with a 4-0 victory over ten-man Newquay at Mount Wise.

James Ward opened the scoring with a bullet header in the seventh minute before Bray-Evans doubled the advantage midway through the half.

Town were given the chance to wrap up victory midway through the second stanza when Tom Whipp saw red for a handball in the box, but Luke Brabyn saw his spot-kick saved by Jack Heaton.

Andrew Westgarth’s side were finally home and hosed with ten minutes to play, with substitute Jack Bowyer scoring with his first touch before Toby Clark completed the scoring with a close-range finish in the dying embers.

Town will now face one of Dobwalls, Saltash United or Wendron United in the semi-finals in March.

Falmouth attacked from the off with early enterprising runs down the right flank from Brabyn and Luke Barner providing a sign of things to come as Town immediately took the game to their hosts.

They didn’t have to wait long to reap the rewards from their bright start with Ward nodding the visitors in front in the seventh minute. Town won a corner and dead-ball specialist David Broglino served the ball on a plate for his skipper to nod past Peppermints custodian Josh Heaton.

The same combination almost provided a second minutes later but Heaton came out on top this time, doing superbly to claw the ball away from Ward’s head.

Bray-Evans began to make his presence felt against his former side, with the ex-Newquay forward teeing up Brabyn, who put his effort over the bar, before another cross evaded Barner at the back post.

And the South West Peninsula League top goalscorer was soon at it again to haunt his former side and double his new side’s advantage in the 20th minute. Barner skipped past the defence to meet a through ball on the right of the box and slipped the ball back inside to Bray-Evans, with the free-scoring forward, who remains Newquay’s top-scorer this term with 12 strikes, rolling it past Heaton for his 27th of a stunning campaign.

The visitors pushed for the killer third before the break but to no avail. Scott Kellow saw his tame deflected shot fall kindly for Heaton before Brabyn’s inviting cross had just too much on it for Bray-Evans to keep in play at the back stick.

Newquay had largely been camped in their half for much of the first 45 minutes but gave the visiting defence something to think about shortly before the interval. Ross Fallens cleared the crossbar with a snapshot on the edge of the box before Cam Turner’s free-kick was met by Ash Bradshaw, only for a Town man to block the effort.

It may have been one-way traffic before the break but the home side found another gear at the start of the second stanza. The Peppermints came agonisingly close to halving the deficit when Tom Shepherd’s free-kick missed the head of the unmarked Fallens by a matter of millimetres, before Town gloveman Ryan Barnes flung himself at another of Shepherd’s set pieces to tip it over his crossbar.

But Town were gifted a chance to make the tie safe from the spot with 20 minutes to play. Brabyn launched an attack down the right and his cross was met by Bray-Evans, whose effort was blocked before Barner’s follow-up struck the arm of the sprawling Whipp, who was given his marching orders as a result. Brabyn stepped up but Heaton guessed correctly to deny the Falmouth man his 24th of the season.

The red card had knocked the stuffing out of Newquay, however, and the final 15 minutes resembled the first 45 as Town began to attack with freedom, with Tom Moxham firing wide from distance before Broglino blazed over from close range.

It was left to substitute Bowyer to score the goal that finally killed the game off with ten minutes to play. Having replaced Bray-Evans only seconds earlier, Bowyer promptly sped into the six-yard box to bundle Barner’s cross into the net.

Barner had two assists to his name but missed the chance to get his name on the scoresheet shortly after when he rolled his effort wide of the mark, but there was enough time for him to complete his hat-trick of assists in the final minute of the game. The lively forward kept substitute Tom Annear’s searching ball alive at the byline before laying it on a plate for Clark, who couldn’t miss from close range.