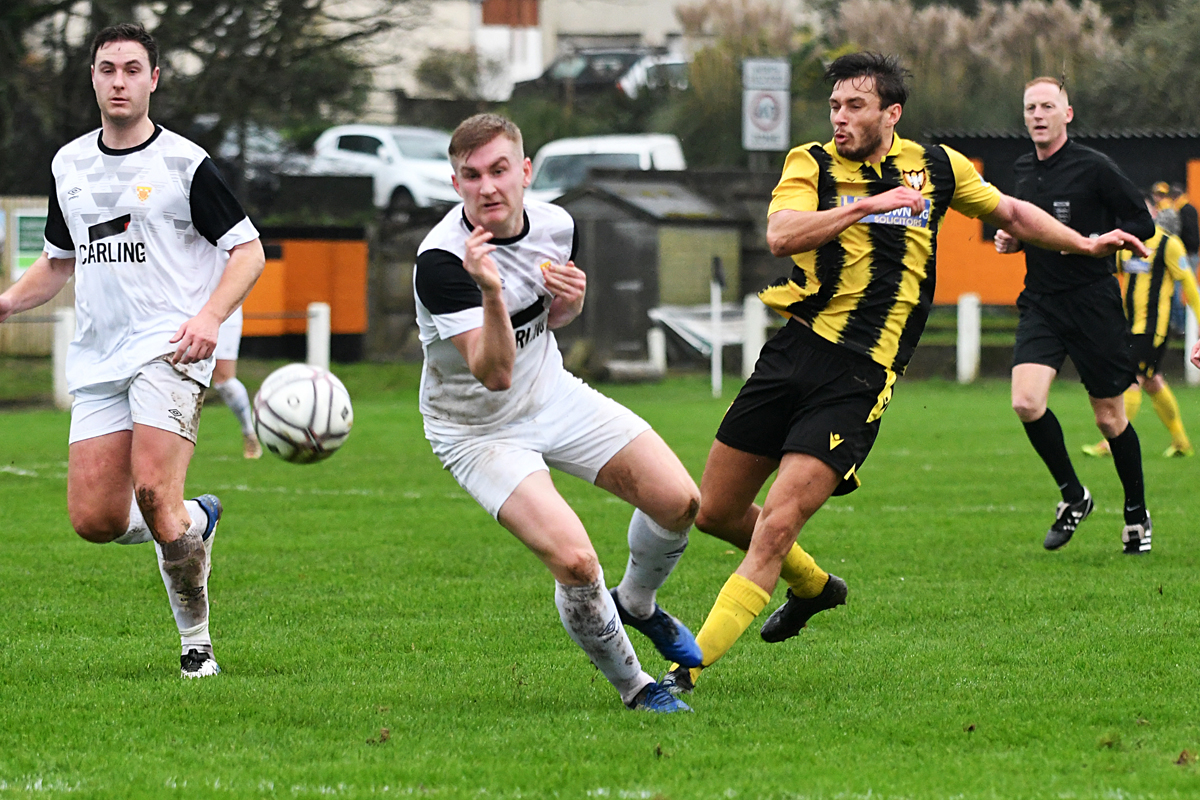 David Broglino scored two goals as Falmouth Town twice came from behind to defeat Wadebridge Town on home soil and extend their lead at the top of the South West Peninsula League to 12 points.

Jacob Smale gave the Bridgers the lead early on at Bickland Park before Jack Bray-Evans’ ninth goal in ten games levelled the match, only for Matt Lloyd to restore the visitors’ advantage shortly before the break.

Whatever was said in the home changing room at the break clearly worked as Broglino scored his 11th and 12th goals of the season inside the first ten minutes of the second half to turn the game around, with Luke Brabyn finally securing the three points five minutes from time as Town ensured their invincible start to the league campaign goes on.

The victory puts Andrew Westgarth’s unbeaten side 12 points clear of second-placed Camelford – whose match at home to Penryn Athletic was called off – with three games in hand, and 13 clear of Liskeard Athletic in third, whose game at home to Sticker also fell foul of the weather.

Town made two changes from the side that ran out 3-1 winners at title rivals Liskeard seven days earlier, with Tom Moxham making his first start for Town in place of Tom Annear, while Alex Wharton came in for the injured Tim Nixon.

Wadebridge made just one alteration from their most recent fixture, a 3-2 win at home to Dobwalls some four weeks prior, with Sam Gerken making way for Harry Hambly.

Clearly keen to get on the front foot, Town looked brighter early on with David Broglino testing visiting gloveman Rob Rosevear with an early sighter before skipper James Ward nodded narrowly wide with a useful header.

Paul Rowe’s side had their ‘keeper to thank shortly after when he was called upon to block Bray-Evans’s strike with his feet before palming away Ward’s goalbound header moments later.

But it was Wadebridge who drew first blood against the run of play, with a fine pass carving the home defence open and finding Smale on the left of the box, who held off one challenge before lashing the ball past Barnes.

However, Town picked themselves up and restored parity just four minutes later. Scott Kellow’s neat slide-rule pass found Bray-Evans inside the box, and the in-form marksman did the rest, slotting underneath the advancing Rosevear.

The hosts retained control of the game and had several opportunities to take the lead as the half wore on via Kellow, Ward and Wharton, who all failed to hit the target.

Those missed chances came back to bite them as the Bridgers restored their advantage two minutes before the break. The visitors earned a corner and Sam Wickins’ delivery was expertly nodded in at the near post by Lloyd for his 11th of the campaign.

Needing a quick response in the second half, Town did just that and levelled the scores within three minutes of the restart. Luke Brabyn sent in a low cross from the right of the box and it found Broglino by the penalty spot, and the midfielder made no mistake with his strike.

In the blink of an eye the turnaround was complete as Town got their noses in front. It was achieved with a moment of individual magic, with Broglino spotting a chance from distance and guiding the ball into the far corner from all of 25 yards to land his eighth goal in his last six games.

Broglino then missed the chance to cap off what would surely have been one of the fastest hat-tricks from a non-striker in SWPL history a few minutes later. Brabyn, a livewire down the right flank during the second stanza, provided a delicious low cross to his team-mate who had the freedom of the Wadebridge box, but he could not keep his shot down.

Toby Clark was keen to get in on the action but the experienced centre-half saw his close-range effort swatted away by Rosevear from point-blank range, before substitute Marcello Jones’ sublime diagonal ball put Brabyn in on goal, only for him to be denied by a timely sliding challenge.

Wadebridge were keen to remind Town that they were not out of the game and some nerves at the back almost provided a leveller when Barnes failed to deal with Kirk Davies’ scuffed clearance and bundled it out for a corner, with the unmarked Smale arrowing wide from the resulting set piece with a speculative scissor kick.

Town resumed their push for the decisive fourth goal to kill of the game, and they thought they’d had it via yet another enterprising run down the right from Brabyn. The energetic forward fed the ball inside to Barner, whose first-time shot from ten yards was expertly tipped over his bar by Rosevear.

But just as it looked Town may have to settle for a single-goal win, that fourth and final goal eventually came four minutes from time. A corner caused bedlam in the Wadebridge box before Brabyn got the goal his second-half display had deserved, prodding the ball over the line to end the chaos and secure another three points.