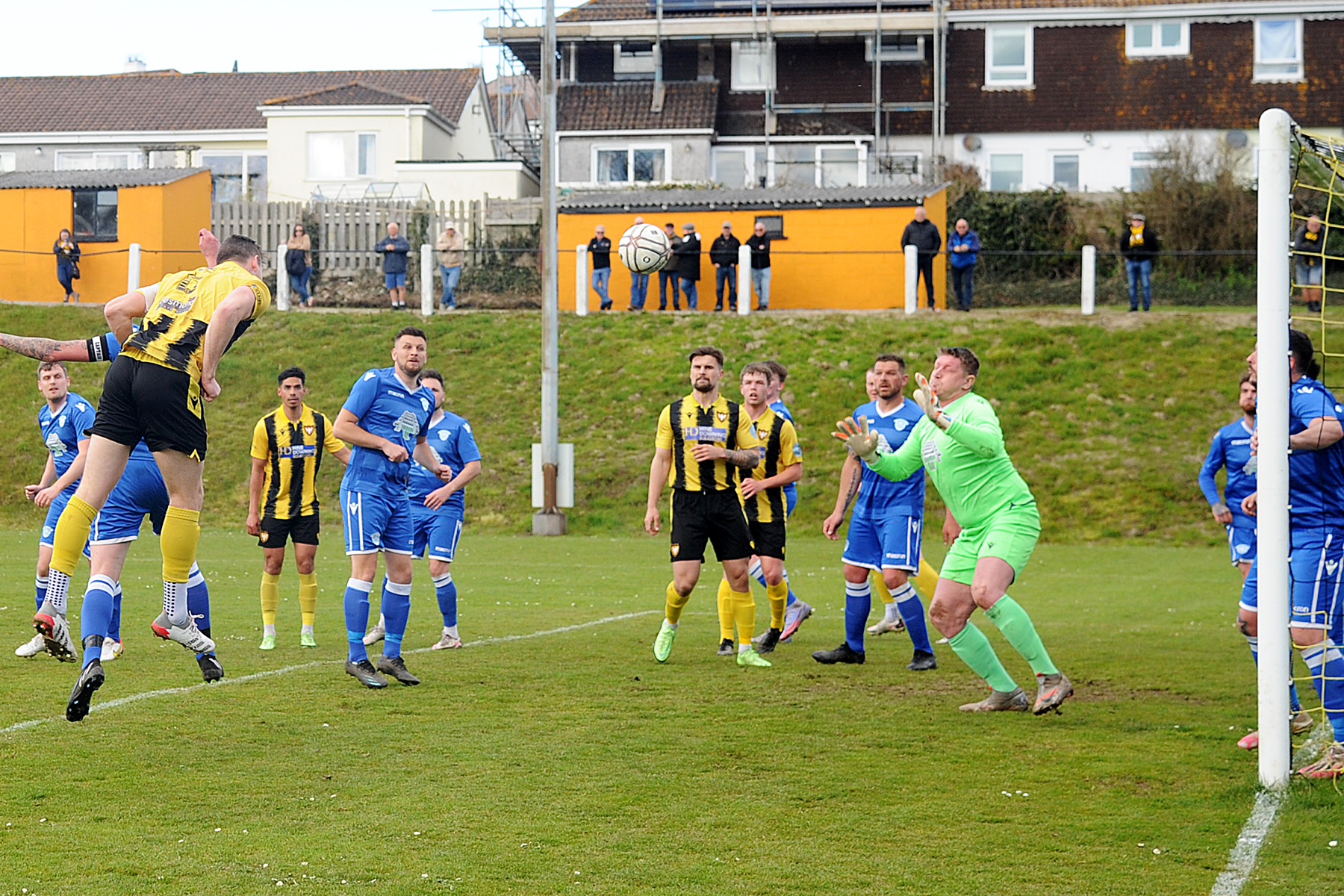 Falmouth Town are one point away from being crowned South West Peninsula League Premier West champions after putting four goals past St Dennis on Saturday.

Goals from James Ward, Tim Nixon and David Broglino gave Andrew Westgarth’s table-topping side a handsome lead at the break at Bickland Park, before Jack Bray-Evans completed the rout after the turnaround.

Town also required Liskeard Athletic to lose at Wadebridge Town to win the title on the day and the signs were good when Matt Lloyd put the Bridgers in front, but the champagne remains on ice after James Rowe rescued a point for the Blues late on.

It means Town can be crowned champions on Tuesday night if Liskeard fail to beat Penryn Athletic at home. Failing that, the title will be secured if Town can take a point from their derby date at Penryn on Good Friday.

Westgarth made two changes to the team that won 2-0 at St Blazey seven days earlier. Reserve team goalkeeper Zach Telling deputised for the absent Ryan Barnes, while Bray-Evans returned to the starting line-up in place of Luke Brabyn.

St Dennis made four changes to the team that ran out 3-1 winners at home to Newquay in midweek, with Joe Munday, Courtney Rowe, Liam Nicholls and Martin Sleeman coming in for Joe Stone, Harry Cranstone, Cameron Rowe and Tyler Trudgeon.

Town were keen to stamp their authority from the get-go with Andreas Calleja-Stayne firing wide from 25 yards, while Bray-Evans saw his first effort clear the crossbar before his second was blocked by a visiting leg.

The resulting corner yielded the opening goal, with Ward rising highest to nod home from David Broglino’s corner for the centre-back’s 13th of the season with just nine minutes on the clock.

Luke Barner and Saints forward Jacob Rowe traded efforts before the league leaders doubled their advantage midway through the half. Alex Wharton raced down the right flank and served the ball on a plate for Nixon, who stroked it past visiting gloveman Ryan Holland from six yards.

With news of Matt Lloyd’s opening goal for Wadebridge filtering around the ground, Town continued to pepper their opponents’ goal with Broglino forcing a save out of Holland before Bray-Evans came close with an effort either side of Nixon’s drive from distance.

Broglino may have started to think it wasn’t going to be his afternoon when he saw two more strikes blocked by Saints shirts, but soon had the goal his efforts merited in the final minute of the half. Bray-Evans’ strike from the edge of the box was blocked and fell kindly for the midfielder, who lashed the ball home from 20 yards for his 15th of the campaign.

The second half resembled an attack-versus-defence training drill as Town bombarded the Saints’ goal for virtually the entire 45 minutes, with Bray-Evans, Broglino and Wharton all coming close within ten minutes of the restart.

Holland almost had a moment to forget when he dropped Wharton’s cross behind him but quickly gathered it before it crossed his line, with Wharton then heading narrowly wide before Barner’s speculative overhead kick went the same way.

It was only a matter of time before the net bulged and duly did ten minutes from time. Barner sent in a sumptuous cross from the left and Bray-Evans was on hand to expertly sidefoot it home from close range for his 25th goal in a Falmouth shirt.

Town were promptly reduced to ten with Bray-Evans removed as a precaution with all substitutes made. Despite the numerical disadvantage, the home side played out the final few minutes embedded in Saints territory, with Brabyn missing a trio of chances late on as an utterly dominant Town ended the match as they started it.

A nervous wait ensued at the final whistle as everyone inside the ground waited on the result at Wadebridge, with James Rowe’s late equaliser dashing hopes of a title celebration for another few days at least.