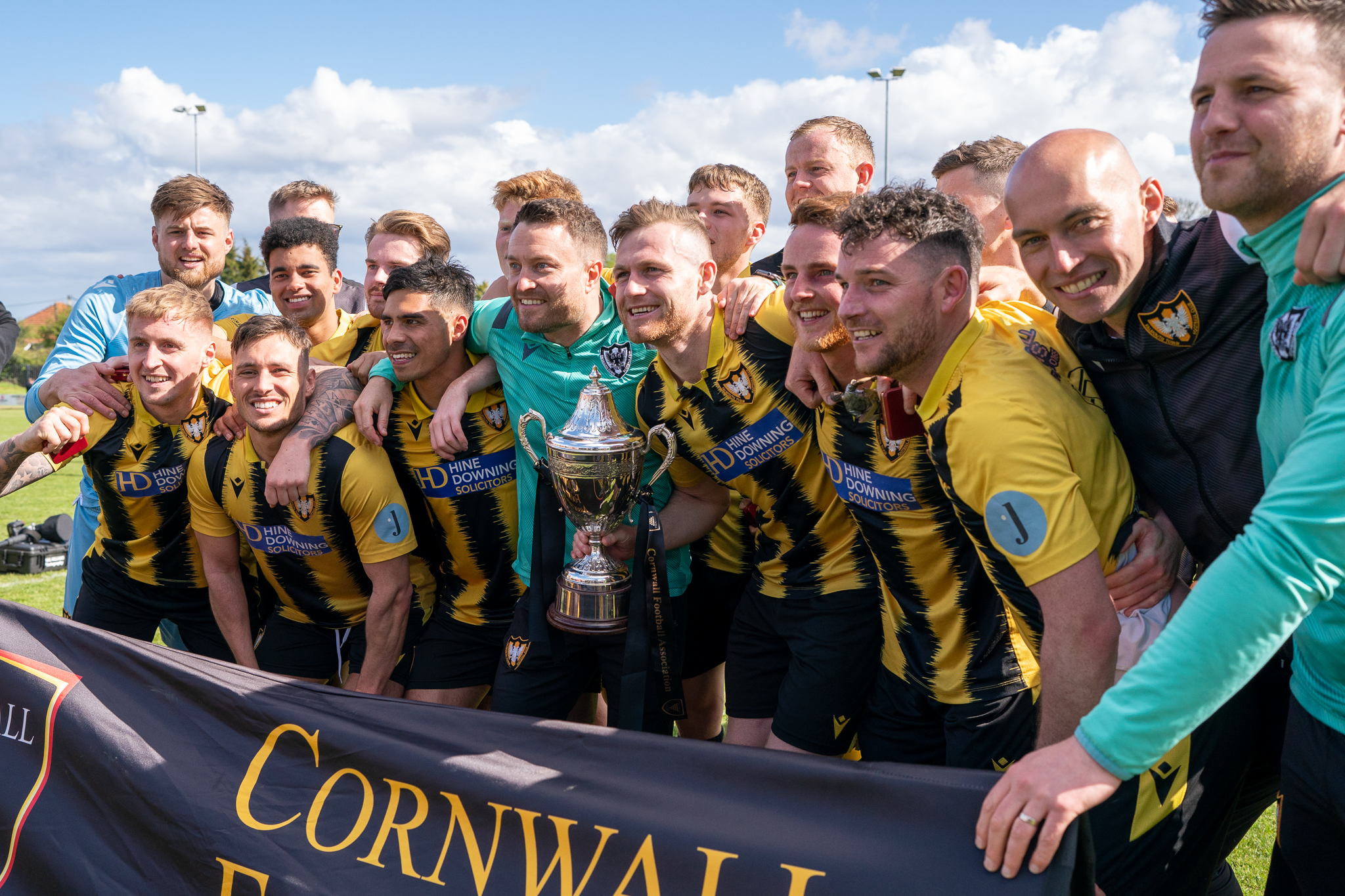 Bray-Evans bagged his 38th goal of a blistering campaign in the 11th minute of the match as Town kept their hands on the trophy they lifted in 2019, the last time the competition was completed.

The goal provided a rare moment of quality in a match that won’t go down as a classic, but that won’t matter to Town and the F-Troop, who accounted for the majority of the 1,298 in attendance at St Austell.

It caps off an unforgettable bank holiday weekend for the Bickland Park outfit, who clinched the South West Peninsula League Premier West title, and with it promotion to the Western League, on Good Friday.

Falmouth chief Andrew Westgarth rung the changes from their 3-2 win at Penryn Athletic three days earlier, with right-back Kirk Davies the only man to survive as no fewer than ten new faces came into the starting line-up.

Wendron boss Michael O’Neill made three changes from the side that lost 1-0 at Dobwalls last time out, with Scott Palmer, Charlie Young and Cameron Wheat returning to the line-up in place of Joe Chapman, Jack Noy and Billy Stone.

The Dron were enjoying their first-ever Senior Cup final but showed little signs of being fazed by the occasion and were almost ahead inside the first minute. Jack Stocker’s effort inside the box beat goalkeeper Ryan Barnes but rattled the crossbar.

Town skipper and man of the match James Ward fired over at the other end before Andreas Calleja-Stayne was denied by Wendron gloveman Ethan Fearn, who himself could have been in man-of-the-match contention.

But the reigning champions found what would ultimately become the decisive goal in their next attack. Tim Nixon’s pass found Luke Barner whose effort was well saved by Fearn, but Bray-Evans was on hand to rifle the rebound past the despairing defence and into the net from an acute angle.

Chances were few and far between for the remainder of the half with the best opportunity falling to Ward, whose free header from David Broglino’s corner drifted over the crossbar.

Knowing they still had plenty of work to do, Town were keen to double their advantage after the turnaround and Ward saw one header saved early on before Fearn pulled off a superb stop to deny the Falmouth captain with his next, tipping the centre-back’s back-post effort over his crossbar.

Wendron were still looking dangerous on the break and Kian Thomas reminded the defending champions that they were very much still in the game, with the winger wriggling free in the box and forcing a good stop out of Barnes.

Despite their endeavour, that effort was the best that the Dron could offer as the Town defence stood firm and did their job, with Bray-Evans almost scoring a second at the other end but for the feet of Fearn.

With time almost up, Wendron hoped for the chance to score a dramatic leveller from the spot when Thomas hit the turf inside the box in the third minute of stoppage time, but was told to get to his feet by experienced referee Simon Long.

Long’s next task, after the awarding of a late free-kick for the Dron that came to nothing, was to blow the whistle for the final time and start the party as Town secured back-to-back Senior Cup titles for the first time since 1979.