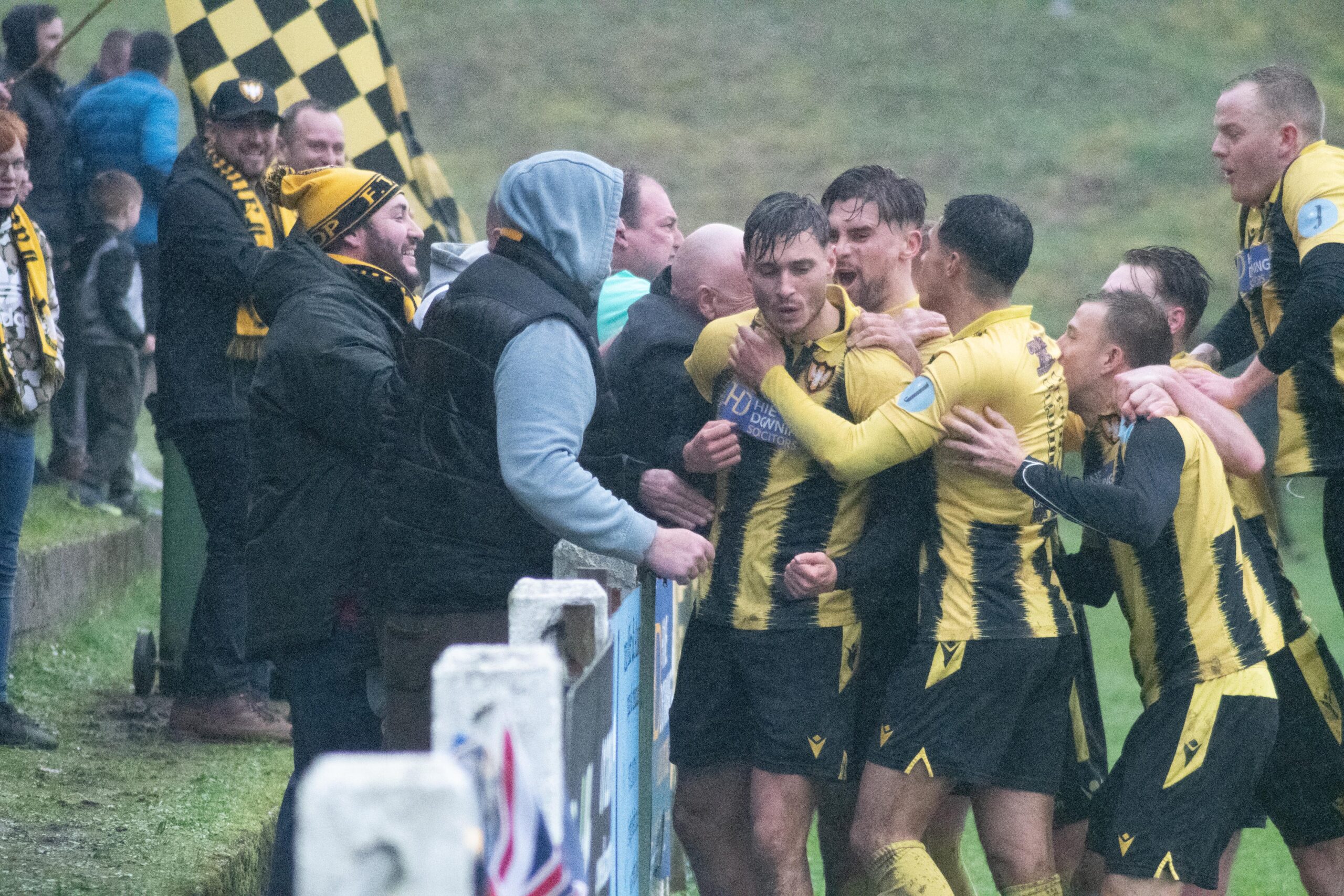 Cam Bidgood opened the scoring for the Lillywhites at Bickland Park in only the second minute with a fine free-kick before Luke Barner responded for the South West Peninsula League west division leaders with a close-range finish ten minutes later.

The hosts, seeking a return to winning ways after suffering their first league defeat of the season to St Blazey last time out, had to wait until the final minute of the 90 to get it, with Brabyn converting from the spot for his 27th of the season after Jack Bowyer had been brought down.

Victory – their 21st of the campaign – ensures table-toppers Town retain their 14-point gap from second-placed Liskeard Athletic, who won 6-1 at St Dennis.

Falmouth boss Andrew Westgarth made one change to the team that lost 3-2 at home to St Blazey a fortnight ago, with the returning David Broglino reclaiming his place in midfield in place of Jack Webber. Andreas Calleja-Stayne, fresh from serving his three-match suspension, was the sole change among the substitutes, coming in for Ryan Martt.

St Austell assistant Steve Wheatly, taking charge in the continued absence of manager Mark Smith, made four changes from the Lillywhites side that were beaten 5-1 at Callington Town in their previous match two weeks earlier. Rory Jarvis, Zach Smith-Brokenshire, Josh Penrose and Aaron Dilley were the quartet to get the nod, replacing Liam Dingle, Keelan England, Zack O’Connor and Joe Tilley respectively.

There was hardly any time to consider which team might start the game the stronger before the visitors drew first blood in only the second minute. St Austell won a soft free-kick on the edge of the Town box and Bidgood stepped up to curl it beautifully over the wall and past the stranded Ryan Barnes.

Sniffing a quick response, Brabyn’s clipped cross was almost headed past his own ‘keeper by a Lillywhites defender before Jack Bray-Evans missed the target with a speculative effort on the volley from outside the box.

The next attack saw Town level the score and it came in marvellous fashion in the 12th minute. Barner was responsible for the goal but it was one made by Tim Nixon, who controlled a long, diagonal ball on the left flank before cutting inside and splitting the defence with a delicious, low pass to the feet of Barner, who prodded it past Lillywhites custodian Brett Allen from six yards.

St Austell were almost handed a chance to restore their lead immediately when Josh Penrose was given the freedom of the Town half to bear down on goal, but a quick recovery in the home defence enabled Town to shepherd him wide and clear their lines.

A break in play followed when Town skipper James Ward was caught by the boot of visiting forward Rory Jarvis, but the centre-half, who has 11 goals to his name this term, was quickly back on his feet and in search of a 12th, only for his first-time effort from the edge of he box to fly over Allen’s crossbar.

The hosts began to gather some momentum as the half wore with Bray-Evans’ scissor kick testing Allen before the gloveman gratefully received Barner daisy-cutter from the edge of the box.

The best chance of the remainder of the half fell to Nixon, whose eyes lit up when the visiting defence missed Ade Thompson’s diagonal ball, but the lively winger could not steer his effort past Allen from a narrow angle.

Brabyn tried to force the issue shortly before the interval, beating two defenders before firing his effort against the body of a third, while Jarvis kept Barnes on his toes at the other end with a strike from distance.

The second half started strongly with Penrose having a shot blocked either side of efforts from Bray-Evans and Brabyn inside the first few minutes.

Broglino was guilty of blazing his shot over the bar at the Packet End before St Austell enjoyed one of their best opportunities of the game at the other. Jarvis cut inside from the left and arrowed a shot towards the far corner, with Barnes scrambling across his goal to save the effort with his knee.

Falmouth began to apply the pressure once more with Connor Paine putting in a vital tackle to take the ball away from Bray-Evans as he shaped to shoot, before Barner struck the crossbar after getting on the end of Thompson’s lofted pass.

Bray-Evans rolled another effort inches wide before another strike brought a moment of skill from both sides. Tom Annear took charge of a free-kick in excess of 25 yards out and drove it towards goal, with the effort seemingly destined for the top corner until Allen flung himself to his left to palm it behind.

Calls from the hosts for handball from the resulting corner fell on deaf ears before a free-kick awarded in the away side’s favour moments later tested the tempers of a few, with Paine earning a ten-minute spell in the sin bin as a result.

With time ticking away, Town threw caution to the wind and pushed forward, with Bray-Evans nodding wide and Brabyn flashing one across the face of goal before substitute Bowyer’s close-range tap-in was correctly ruled out for offside.

But just as it seemed that the league leaders would have to settle for their first draw of the season, the decisive moment finally arrived. In the final minute of the 90, Bowyer was deemed to have been brought down just inside the box, with Brabyn keeping his cool to drill the resulting spot-kick into the bottom corner to snatch victory in the dying embers.