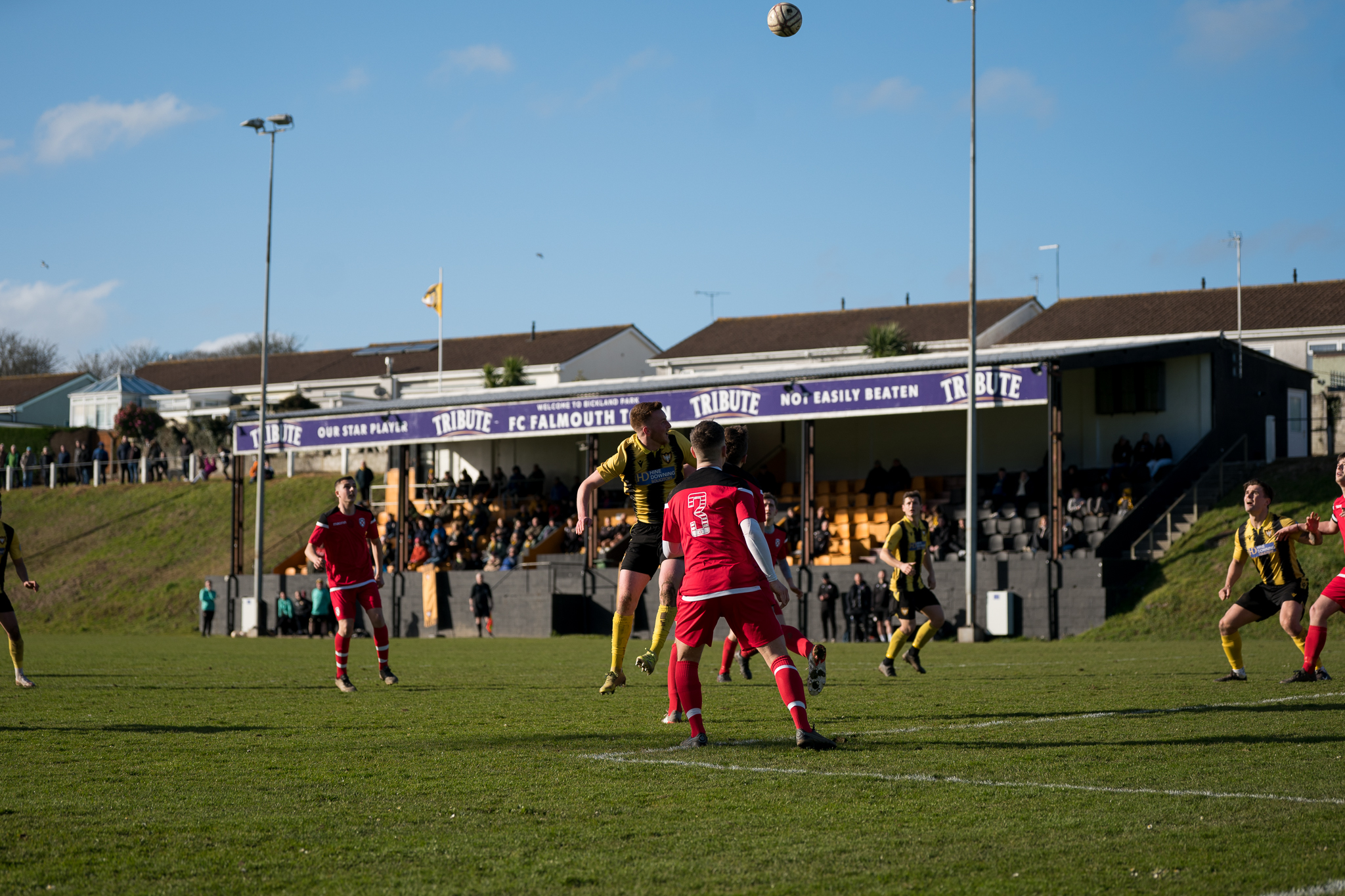 Falmouth Town will look to cap off a fine week for the club when they make the trip to St Austell on Saturday (kick-off 3pm).

Fresh from setting up a Cornwall Senior Cup final date with Wendron United after defeating Dobwalls 4-1 on Tuesday night, Town now turn their attentions back to South West Peninsula League action, with the west division leaders aiming to record their 23rd win of a fantastic campaign thus far.

It will be a first trip to Poltair Park for Falmouth since August 2019, when goals from Jack Hooper and Hayden Turner condemned Andrew Westgarth’s side to a 2-1 defeat under the lights.

Last weekend saw the Lillywhites pick up their first win since the end of November, with Matt Searle and Rory Jarvis scoring in a 2-1 victory at home to Bodmin Town at a sodden Poltair Park.

Speaking ahead of the game, Westgarth said: “We’re going to have to be careful, when you have a big result the next game [can feel a bit like] after the Lord Mayor’s show sometimes, you take a while to get going again after the euphoria of that win.

“But what I would say is we’ve had to deal with expectations and pressure all season and I think we’ve handled ourselves really well that way, and after every big game we’ve normally delivered in the next one.

“St Austell is a tough place, they had a good win themselves against Bodmin [last weekend], their first one for a while so they’ll have a bit of renewed confidence. I’ve not got a very good record there as a manager, I don’t think I’ve actually won there in the league.”

The two teams met only three weeks ago in the reverse fixture at Bickland Park, with Town requiring an injury-time penalty to edge past Mark Smith’s side and record a 2-1 win.

Seeking a response in their first game following their first league defeat of the season at the hands of St Blazey two weeks prior, Town fell behind in only the second minute when Cam Bidgood fired a fine free-kick past Ryan Barnes.

Luke Barner levelled the score shortly after, but a winner proved elusive despite a dominant second-half performance.

But just as it seemed they would have to settle for a point, Jack Bowyer was felled in the box in the 90th minute and Brabyn tucked away the resulting spot-kick to rescue a priceless victory for Falmouth, with Westgarth acknowledging the significance of that late winner.

“I think if we are successful and we achieve what we set out to do, we will look back on that St Austell result as being so significant because we all knew how big it was,” he said. “It really sharpened us and since then we’ve looked really good – Newquay away we were excellent and against Dobwalls in the semi-final for that first 45 minutes we were exceptional.

“You can see the confidence and belief there now – I’m not saying it wasn’t there before but you can see it really ramping up now, but if we’d got a bad result against St Austell who knows where we could have gone.

“It was absolutely massive in the context of the season, and like I said it’s been a good thing for us because we’ve got to sharpen that pencil because we know how tough it could be on Saturday.”