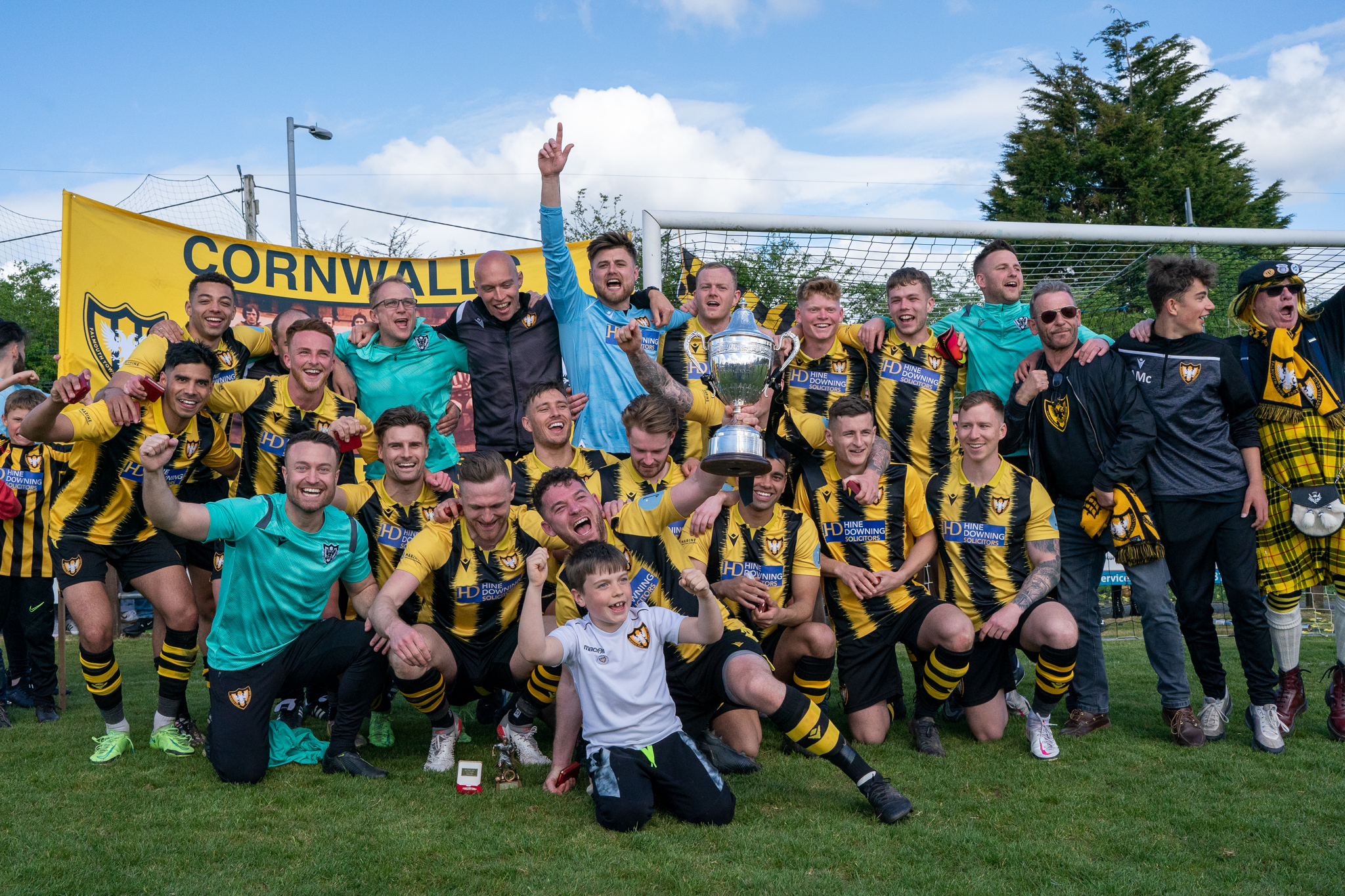 Falmouth Town brought the curtain down on the 2021/22 season in the traditional style on Saturday night with the club’s annual dinner and awards night.

Town players, officials and supporters came together at the Falmouth Hotel on Saturday to celebrate what has been a memorable campaign, which saw the first team achieve a stunning treble and promotion to the Western League.

The traditional awards were then handed out, with Luke Barner, Ryan Barnes, Andreas Calleja-Stayne, James Ward, Jack Bray-Evans, Zach Telling and Charlie Edney all being recognised for their individual efforts over the season.

Barner was given the honour of the SWPL side’s manager’s player of the season award, with Westgarth opting for the near ever-present forward following an impressive campaign in which he bagged a phenomenal 33 assists.

“I just think his level of consistency this year has been second to none,” Westgarth said. “His numbers have been unbelievable – he’s got 21 goals and 33 assists which is incredible. I think we’ve played 44 games this year and he’s started 41 of them.

“He missed the first two games of the season because he was away, and then he’s only missed one game since, which was the Penryn game when it wasn’t his decision [not to play].

“From his position that he plays in and just the times of when he scores [are so crucial]. He scores such important goals in big moments of games. In terms of his stand-out games, I remember the Liskeard game away, he scored at such a pivotal time, and against St Blazey away he scored the important second goal.”

The supporters’ player of the year award went to goalkeeper Barnes, with the club’s longest-serving player enjoying an excellent campaign between the sticks, keeping 13 clean sheets and pulling off some memorable saves.

“I think everybody just loves him,” Westgarth said. “He’s such a character around the club and such a personality, when we’re winning games he’s at the forefront of things. Being a goalkeeper sometimes it can be a bit lonely at the other end of the pitch, but he makes up for that when we win and he gets involved.

“Again, his stats are really impressive this year. He hasn’t missed too many games and kept 13 clean sheets, so it’s a pretty good return for him.

“I think the highlight of his season without a doubt was that St Blazey save. Liam Eddy’s gone clean through and he’s made a save, and then straight after he’s put one onto the crossbar and that just gives us such a platform to then go on with Barner scoring the second goal.”

Calleja-Stayne scooped the young player of the season award after an impressive debut campaign at Bickland Park following his arrival from Penzance last summer.

The central midfielder had a slow start to life at Falmouth, making two starts in the first eight games, but a late winner against Bodmin Town proved to be a pivotal moment, with the youngster going on to play in all but six of the remaining 35 matches.

“It was worth me driving down to Penzance four times a week because he didn’t have his driving license at the start of the season,” Westgarth said. “There’s just something about him and he’s been such a key player for us.

“He took a bit of time to get going and then came on as a sub against Bodmin and scored the winner. He started the next game against Dobwalls and I think he just excelled from there.

“I’ll take my hat off to him. He knuckled down then and became a key player and a virtual ever-present really, and that’s credit to him. He’s become a real asset for us.”

First-team captain Ward received the honour of the revered players’ player of the year award, as voted for by his colleagues. As well as his dominant presence in the heart of defence, the centre-back also pitched in with a superb 13 goals and eight assists.

Ward, enjoying his first full season as captain of the side, was named man of the match in the Cornwall Senior Cup final and had the additional honour of being the first Falmouth skipper to lift three trophies in a season since 1997.

“It’s been a great season for him on the pitch with his personal stats,” Westgarth said. “He’s been colossal at the back and chipping in with 13 goals from centre-half is pretty impressive, but what’s also been impressive is his assists, I think he’s got eight this season.

“He’s such a weapon defensively, but also from an individual point of view, to be the first captain to win the league since 1999 and walk up those steps [at Bickland Park] and then to crown it with the Senior Cup and Champions Bowl, on a personal level it’s been fantastic for him.

“The players’ player award is the one everyone wants to win and I think he’s a worthy winner. I think sometimes with Wardy, because he sets a high bar and he’s such a good player I think it can be taken for granted how important he is for us, but it’s great for the lads to recognise it.”

Jack Bray-Evans added the club’s top goalscorer award to his collection of accolades this season. The prolific forward, who signed from Newquay at the end of September, scored 32 goals in just 29 games for Town, which gave him a total for the season of 44, after netting 12 for the Peppermints.

Thirty-four of those came in SWPL competitions, which saw him earn the west division’s golden boot, which he received before the 4-2 victory over Torpoint Athletic in the season-ending Champions Bowl last weekend.

“I don’t think his stats lie, do they?” Westgarth said. “Jack wanted to come to the club to win trophies and score goals and that’s exactly what he’s done. It’s been a bit of a journey for Jack, I think at the start he was patient and played out wide and I think he’ll be the first to admit his fitness levels probably weren’t what he expected and he was very patient.

“But he hit the ground running straight away, I think he scored two in his first game against St Dennis and he never looked back from there. His stand-out moments include that Penryn game on Boxing Day, scoring four goals in such an important game for us.

“He’s very similar to Barner in scoring at important times, and what an end to the season he had on a personal level: scoring a hat-trick to win the golden boot, the winning goal against Newquay at home, the winning goal in the Senior Cup final and two goals in the Champions Bowl – it’s an impressive list.”

Telling, who was absent on the night, received the St Piran League manager’s player of the year award from boss Ryan Martt, with the goalkeeper’s hard work and dedication behind the scenes being recognised by his manager.

The dependable custodian also impressed on his three call-ups to the first team to cover Barnes, winning all three games and keeping two clean sheets.

“Zach, even before I was manager, was there every week, always committed, always positive,” Martt said. “Being the captain he was a leader, but you could see he was a step above the guys in terms of being supportive and helping the young lads.

“Then when I was manager he was always on the phone to me and doing logistical stuff that I sometimes didn’t have time to do because he worked from home, so he was a massive support.

“As a player, he played incredibly well in so many games which is testament to the fact he got called up to the first team to cover Barnesy a few times and only conceded a couple of goals for the first team.”

Edney’s sensational season in the St Piran League saw him collect two awards, with the prolific striker’s 29 goals in 27 games securing him the top goalscorer award, while his all-round work ethic and attitude earned him the players’ player of the year award.

“To get top goalscorer, as a striker, for him personally that’s a massive achievement and to win that for the club and the league is great for such a young player.

“His goalscoring record is amazing, but for me what really tipped it, and why there was no real competition [for the players’ player award], is his work off the ball and on the ball is second to none. His attitude, even when things weren’t going our way and he was frustrated, [was superb], he still kept his head.

“He’s 100 per cent committed and is back winning the ball, and for an 18-year-old to be holding up veteran defenders and outmuscling them, he’s playing above his years.